​Southampton made it back-to-back Premier League wins after Pierre-Emile Hojbjerg's fourth league goal of the season secured a 1-0 win over Brighton.

Clear-cut chances were at a premium in a first-half that the Saints shaded, with the best opportunity for a goal coming 11 minutes before the interval, but Danny Ings saw his effort blocked well by Bernardo.

The second period began in much the same vein, with the visitors looking the likelier side to break the deadlock, and they did just that on 53 minutes, as a counter-attack from Southampton was finished well by Pierre-Emile Hojbjerg. It took until the final 20 minutes before Brighton mounted any notable attacks on the visitors' goal, the best coming when Martin Montoya struck the crossbar with a long-range strike, although the Seagulls couldn't find an equaliser as Southampton held on for the three vital points.

Here's a breakdown of this one: 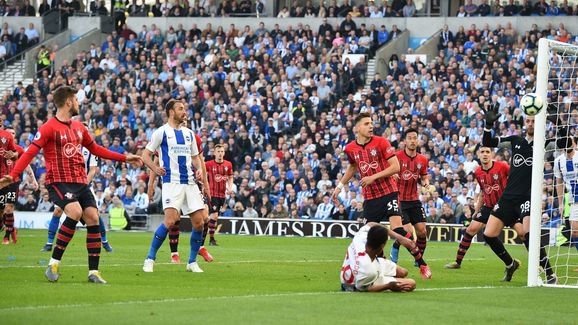 It appeared that Brighton had their FA Cup semi-final against Manchester City in a week's time on their mind, as the hosts looked out of sorts at the Amex Stadium - which has been the source of the vast majority of their points this season.

Chris Hughton's side were laboured in possession for the vast majority of the game and looked bereft of ideas in the attacking third, and were fortunate to only be one goal behind by the time Hojbjerg broke the deadlock eight minutes after the restart.

It took until the final 20 minutes before the Seagulls got themselves into the game, as they mounted pressure on the Southampton goal, with Glenn Murray seeing his shot blocked well and Martin Montoya striking the crossbar from the edge of the area, although in truth, it was a game that passed the home side by, and they will be looking pensively over their shoulder.

Few players stood out for the home side, although left-back Bernardo was the pick of the bunch with his vital block to deny Danny Ings in the first-half, while his cross in the second-half almost produced an equaliser, but Murray saw his shot blocked from point-blank range.

Superb late block from Bernardo to deny Ings a clear strike at goal. It's a fairly even encounter but Saints are definitely looking more dangerous going forward.

Down at the Amex where not a lot has happened but Bernardo (one of the game's most eloquent speakers, literally, he speaks like seven languages) has just put a super last-ditch block to deny Danny Ings' shot which looked to be going in. 0-0 #saintsfc #bhafc 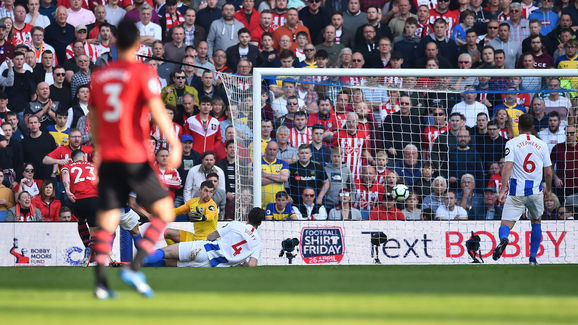 It certainly wasn't the most entertaining Premier League game of the season, although Ralph Hasenhuttl won't care one bit after his side earned three precious points in their quest to avoid relegation.

The Saints provided more of a goal threat over the course of the game, especially through the front pairing of Danny Ings and Nathan Redmond, with their pace on the counter creating opportunities that they couldn't quite capitalise on in the first period.

A crucial away win in the relegation 6 pointer.

Nervy at times, but well done to the boys. Cracking result.

It came as no surprise then that Southampton's goal did come on a pacey counter-attack, as Redmond led the charge after possession was overturned on the halfway line, before laying off Hojbjerg, who finished well to decide the contest on the south coast.

Nathan Redmond was Southampton's main threat at the Amex Stadium, with his central position ​causing Brighton a number of problems on the counter-attack, most notably when he set-up Pierre-Emile Hojbjerg for the game's only goal with a well-weighted through ball.

Brighton still have another fixture before their FA Cup final against City in a week's time, as they travel to west London on Wednesday to take on Chelsea.

Southampton meanwhile have successive games at St. Mary's next, beginning with a tough assignment against Liverpool on Friday, which is then followed by a game against Wolves.