Since Sergio Aguero first arrived in the Premier League in 2011 no player has been more ruthless in dispensing of newly-promoted sides. The Argentine has contributed an impressive 36 goals in just 48 games against the newcomers in his eight years at Manchester City.

He added the second for City as they coasted past Premier League strugglers Fulham at the weekend to bring his total to 29 goals. Add to that a further seven assists and few players will strike more fear into the hearts of newly-promoted defences.

36 - Since the start of the 2011-12 season, Sergio Aguero has been involved in more Premier League goals against newly-promoted teams than any other player (36 – 29 goals, 7 assists). Bully. #FULMCI pic.twitter.com/Jphq0mWLz6

Manchester Citystruggled to press their ascendency in the clash against Fulham despite having 24 shots on the opposition goal. Bernado Silvacapitalised off a couple of early mistakes, putting his side ahead inside six minutes before teeing Agueroup 20 minutes later to wrap up a 2-0 win.

That wasn't the only accolade Aguero earned for that clinical finish as he also drew level with Arsenal legend Thierry Henry's total goal tally for the Gunners, taking his overall Manchester City record to an outstanding 228 goals as he continues to chase down the Premier League's all-time top scorers.

Sergio Aguero has now scored same number of goals for Manchester City as Thierry Henry did for Arsenal.

Where does @aguerosergiokun rank amongst the greatest @premierleague strikers for you? pic.twitter.com/ocAA6Bv0ko

More impressive than that, Aguero even beat the Frenchman to that tally by 46 games, practically an entire season's worth of football. A good majority of those goals did come outside of the Premier League though with Aguero still trailing 14 goals behind Henry's final league tally.

At just 30, Aguero, who currently sits eighth in the overall list of ​Premier League top scorers charts, still has time to complete more goalscoring exploits. The forward is on course to overtake both Jermaine Defoe and Robbie Fowler this season to put him just one place behind the Gunners icon. 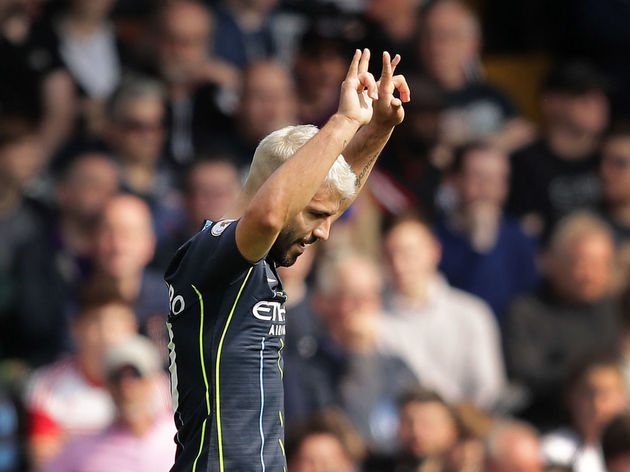 There's no doubting the impact Aguero has had on Manchester City's fortunes since his arrival and he will surely go down as one of the all-time greats for the Citizens - if not the greatest ever.