​Manchester City boss Pep Guardiola has confirmed Kevin De Bruyne and Fernandinho have been passed fit ahead of the side's return to Premier League action on Saturday.

Belgium international De Bruyne was ruled out at the start of the month with a thigh injury sustained against Bournemouth, while teammate Fernandinho has been missing for City since February with a muscle problem. 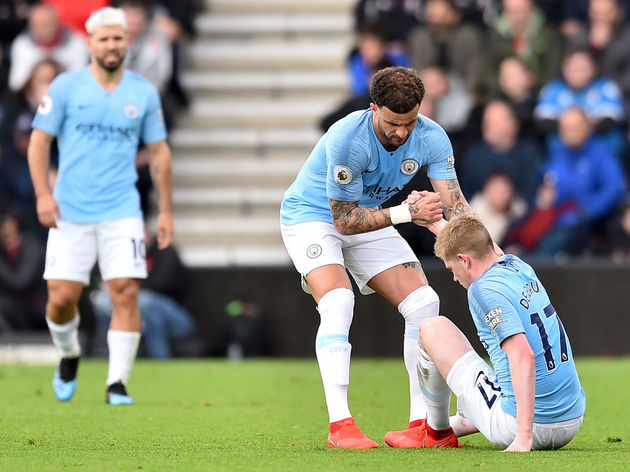 However, in his pre-match press conference ahead of the game against Fulham, Guardiola revealed the duo would be in contention to play, whilst also confirming positive updates on ​Vincent Kompany and Benjamin Mendy.

He said (as quoted by the ​club's official website): "Everybody came back fit - Fernandinho, Kevin, Vincent - yeah, everyone is okay.

“Except Fabian Delph, the other people are fit. Yeah [​Mendy is fit]. Of course, he needs time but he has trained the last three days and his reaction is very good.

“Hopefully he will play a big part. We have 21 players. We have to compete with each other in positions."

Despite ​City being involved in a dramatic ​Premier League title race with Liverpool, and also entering the closing stages of both the FA Cup and Champions League, Guardiola refused to use the punishing fixture schedule as an excuse.

He added: "It is what it is. Sky, BT they decide when we play. After international break, we come back good. We have done and incredible amount of points.