Barcelona are back at Camp Nou on Saturday afternoon, as they host Espanyol in the Catalan derby.
The Blaugrana will be eager to build on their lead at the top of La Liga, where they currently sit ten points clear of second-placed Atletico Madrid. Now back from the international break, Ernesto Valverde's side are searching to wrap up their eighth league title in 11 years.
Meanwhile, Espanyol will face a huge task when they travel across the city to visit their neighbours this weekend. The Periquitos are 13th in the table equidistant between the European spots and the relegation zone, with nine points the difference in either direction.
Here's our breakdown of Saturday's ​La Liga clash.

​Barcelona could have two key players ready for this weekend's game, with ​Lionel Messi and ​Luis Suarez both back in training. Messi should return following an injury picked up on international duty with Argentina, while Suarez is back in training following an ankle injury.
However Valverde will still be without ​Ousmane Dembele, who has a hamstring injury but could be fit in time for Barca's ​Champions League tie against ​Manchester United on 10 April. ​Rafinha is also still out, with his torn knee ligament sidelining him for the rest of the season.
For Espanyol, Sergi Darder is suspended following his red card in their defeat to Sevilla. Pablo Piatti and Sergio Garcia are also unavailable for Saturday's derby, with both players ruled out through injury. ​Barcelona and Espanyol have played 61 Catalan derbies over the years, with Barca having a remarkably better record. The Blaugrana have 41 wins to their name, while the Periquitos have only prevailed five times.

Last time they met was this season's La Liga reverse fixture, when ​Barca won 4-0 at the RCDE stadium. The reigning champions won thanks to a brace from Messi and goals from Dembele and Suarez, as they cruised to victory to extend their lead at the top of the table.

Espanyol's last league win over Barcelona came back in February 2009, when they won 2-1 at the Camp Nou. However the Blaugrana are unbeaten in 19 league games against their Catalan rivals, having scored four goals or more nine times this decade across all competitions. Barcelona are in fantastic form, as they sit top of La Liga and have a Champions League quarter-final to look forward to. Their current domestic form is also excellent, and despite their Supercopa de Catalunya defeat to Girona they are on a 16-game league unbeaten run.

On the other hand, Espanyol have been struggling recently. They have one win in their last five games, and haven't won any of their last nine league games away from home- a serious concern as they prepare for a trip to a team with ruthless home form. 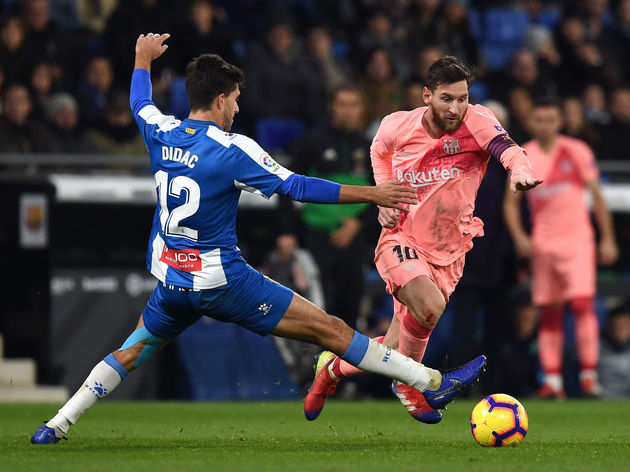 With ten games to play of the La Liga season, it is all to play for for Barcelona as they aim to wrap up the title. On the contrast Espanyol aren't really playing for anything, as they sit right inbetween the European places and the relegation zone.

With Barca in rampant form and Espanyol greatly struggling on the road, Barca are expected to produce a routine win. While a shock win from the visitors isn't possible, Barcelona are clearly the favourites to prevail at the Camp Nou.