​Manchester City travel to Craven Cottage ​to face Fulham on Saturday afternoon as they resume their Premier League title charge.

Pep Guardiola's team find themselves chasing Liverpool once more after missing the last round of league fixtures due to their involvement in the FA Cup. Whilst they overcame Swansea City in that quarter-final tie, the Reds saw off Fulham to return to the top of the table. City do, however, have a game in hand and will be eager to retake the lead in the title race, with Liverpool not in action until Sunday. If they are to do so they must beat a struggling Fulham side who have not won in any competition since January. Since that 4-2 victory over Brighton they have lost seven straight games, netting just four times. Their poor run of form has left them on the brink of relegation, the Cottagers now 13 points off of safety.

Check out 90min's preview of the encounter below.

Forward Andre Schurrle could return this weekend, the German having missed Fulham's last few games due to a virus. However, Scott Parker will be without goalkeeper Marcus Bettinelli and centre-back Alfie Mawson.

The former picked up a knock in training which has ruled him out of contention for Saturday's clash, whilst a knee injury means Mawson is likely to be out until the closing weeks of the season. Their opponents have a number of personnel unavailable due to injury, with the defensive trio of Vincent Kompany, John Stones and Benjamian Mendy all set to miss the trip to Craven Cottage.

Joining them on the sideline are Claudio Bravo and Fabian Delph, the former still recovering from knee ligament damage he sustained at the start of the season. However, Guardiola could receive a significant boost, with Kevin De Bruyne and Fernandinho both possibilities as they near the end of their respective recoveries from muscular problems.

This is the third meeting between the two sides this season, with the ​​Citizens having won both of the previous encounters. Scores from Leroy Sane, David Silva and Raheem Sterling helped the ​Premier League champions to a comfortable victory in September, with a Brahim Diaz brace proving enough to see them in to the League Cup quarter-finals two months later. 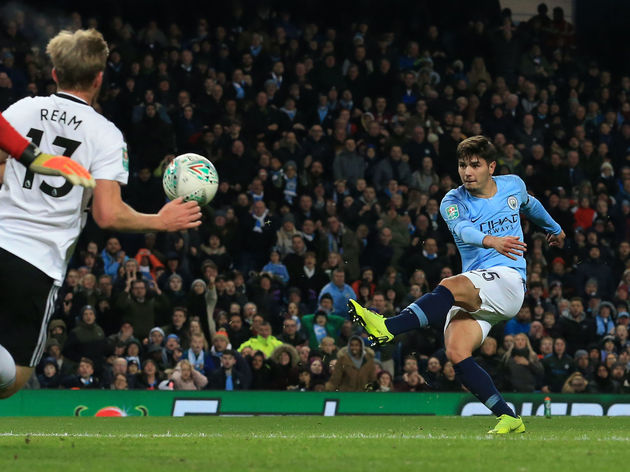 Those two triumphs took City to seven consecutive victories over the ​Cottagers, a side they have not lost to since April 2009. Since that 3-1 success Saturday's hosts have secured just three draws, going down on ten separate occasions. In that time they have conceded 34 goals, only scoring 11 themselves.

That trend of Manchester City dominance reflects the overall record in this fixture. They have amassed a total of

Fulham have endured a torrid spell of late, taking a mere three points from their last 11 Premier League matches. They also suffered an embarrassing FA Cup exit at home to fourth division outfit Oldham Athletic, giving up the lead in a demoralising 2-1 defeat.

Parker's team have looked competitive at times during that run, narrowly losing out to ​Liverpool and ​Chelsea in recent weeks. However, their failures have left them drained of confidence and facing instant relegation back to the ​Championship, a hugely disappointing outcome given their £100m summer spending spree.

Things have been decidedly different for City who have only been beaten once this calendar year. They have won their last six league fixtures since defeat at ​Newcastle United, whilst also securing qualification to the ​Champions League quarter-finals and the League Cup trophy.

The manner of those victories has been particularly impressive, with City exhibiting both a dogged determination and terrifying attacking ability. Comebacks against ​Swansea and ​Schalke demonstrate their resolve and unwavering self-belief, whilst their 6-0 demolition of Chelsea showcased the virtuoso talent in their squad.

Here's how the team's have performed in their last five games:

The form book and league table suggest there is only one winner in this match-up. The London side will have been left dejected by their inability to take points from recent games, opening the door for their opponents to take advantage. Despite this, Fulham's dire situation means that the pressure is off; no one expects them to climb out of the drop zone. With that being the case, the players will be free to express themselves on the pitch, giving their fans something to enjoy.

Nevertheless, City have an abundance of highly-capable performers and should brush their hosts aside. If the likes of Sterling and