Manchester City will enjoy an injury boost with Fernandinho, Kevin de Bruyne and John Stones all set to return for the Citizens ahead of a hectic April which sees the squad play nine matches in 29 days.

The Manchester side currently sits in second place in the Premier League, two points behind Liverpool with a game in hand. City have been on fire over the past few months, winning 11 straight matches following a defeat to Newcastle United in their final game in January. The squad has won every match since the three stars went down with various injuries in February and March.

Who's been training today then? 

Pep Guardiola has had to rotate his squad more than usual with the three regular starters going down. After taking a week off during the international break, The Sunis reporting that Guardiola returned to training to learn that his three stars could be fit for the weekend match at Craven Cottage against Fulham.

Fernandinhohas been out since suffering a groin injury against Chelsea in the Carabao Cup Final, while De Bruyneand Stones received knocks of their own in a Premier League match against Bournemouth at the beginning of March.

Guardiola will monitor the player's fitness throughout the week at City's football academy to be sure they are fit enough to feature in the next match. 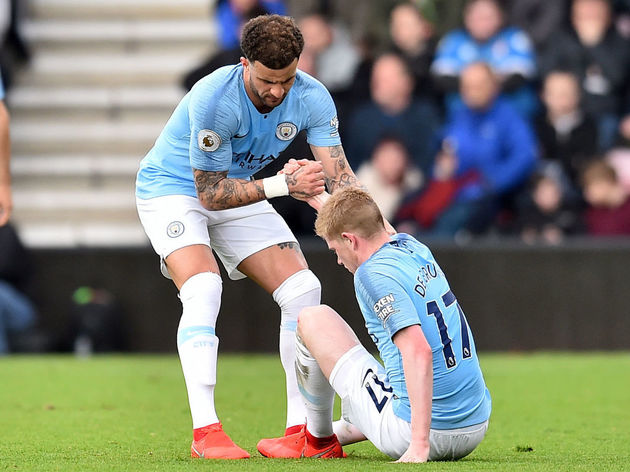 Saturday's game will be the first of nine fixtures throughout April with City still in the running for a historic quadruple. The busy schedule will require the squad to be at full strength if they are to continue to fight for this monumental goal.

Meanwhile, French full-back ​Benjamin Mendy is also making good progress in his rehabilitation from a long-term injury that has seen him feature for the Citizens once since the middle of November. Mendy is not expected back quite yet as the club will be careful with his recovery and is not likely to rush him back onto the pitch.

Manchester Citycontinue the defence of their Premier Leaguetitle when they take on Fulham at Craven Cottage on Saturday night. A win will see City leap above Liverpool into first place before the Reds' match against Tottenham on Sunday.