​Spain manager Luis Enrique praised his side’s performance on Saturday night, as they beat Norway 2-1 in their opening EURO 2020 qualifier.

La Roja prevailed in Valencia thanks to goals from Rodrigo and a penalty from Sergio Ramos, as they went top of Group F. It was the perfect result for Spain, as they began their qualifying campaign in the best way possible. Speaking after the game, Enrique gave his thoughts on Spain’s performance. As quoted on the national team’s official website, he said: “It was a very complete game, we generated a lot of goal opportunities. I am happy with the performance of the team.”

Spain were in action for the first time in four months, having last played in the inaugural Nations League. However La Roja’s debut campaign in the competition saw no change in their League A status, as they finished below England and above Croatia to remain safe.

Speaking about his system, Enrique said: “I liked the team in both [defence and attack], it's very difficult to put pressure on a team that barely generates from behind. I think we have defended well, starting with victory was very important and the merits are beyond doubt.” Spain’s dominance throughout the game wasn’t reflected in the scoreline, as they only scored twice from 26 shots and 75% possession in the game. Enrique added: “I would like to have had a wider result, that is improved by generating confidence in the players.”

One player who struggled to capitalise on his opportunities on Saturday was ​Alvaro Morata. The Atletico Madrid striker had a number of missed opportunities throughout the game, as he struggled to produce a clinical performance at the Mestalla.

Asked about Morata, Enrique said: “I see Alvaro much better than last year, he has always had a good attitude, but he is more convinced, he has made the best match with us so far.” 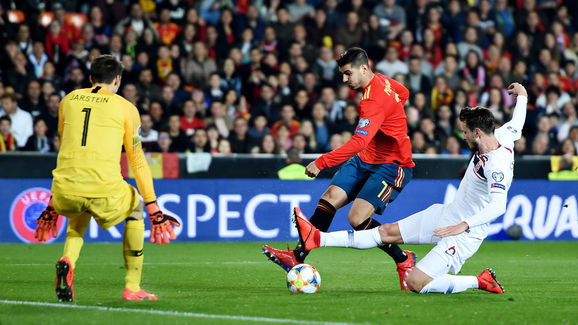 Spain continue their European qualifying campaign next week, when they travel to Malta on Tuesday. La Roja must then wait another three months before their next fixture, when they travel north to face Faroe Islands on 7 June.