​Spain began their Euro 2020 qualification campaign with a win in Valencia as they beat Norway 2-1 on Saturday night.

Spain took the lead in the 16th minute, as Rodrigo met Jordi Alba's cross perfectly and guided it home to give La Roja a deserved lead. Norway had a huge chance to equalise 15 minutes later, but Tarik Elyounoussi somehow ended up diverting the ball away from the open goal.

Luis Enrique's side thought they had doubled their lead before the break with a wonderfully worked team goal, but the move finished off by Alba was disallowed for offside.

Suddenly in the 65th minute Norway got a huge chance to get themselves back into the game, as Iñigo Martinez gave away a penalty. Martinez was booked, and Joshua King placed his shot into the bottom corner to draw the visitors level out of nothing.

However, Spain retook the lead just six minutes later, winning a penalty of their own. Captain Sergio Ramos stepped up and delicately chipped the ball down the middle to restore La Roja's lead and secure all three points. 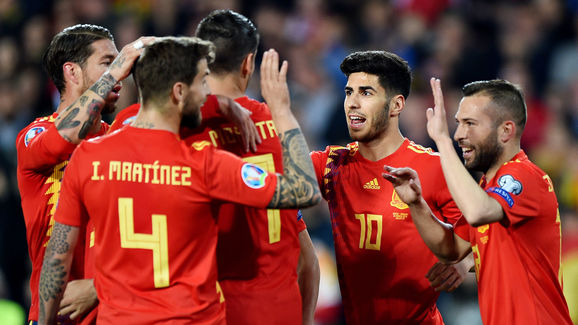 Spain were in cruise control right from the start and set the tone of the game straight away. La Roja dominated from start to finish, dictating the game and showing their trademark style of football that has proved so successful throughout the century.
After a mediocre Nations League debut last year, Spain were eager to begin qualifying for next year's European Championship with a win, and they certainly did that. They were fantastic at the Mestalla and thoroughly deserved the three points on a successful night in Valencia.

STAR MAN - Both Jordi Alba and Rodrigo in fine form, but it was the former who really stood out for Spain. Alba set up Spain's opening goal and was outstanding all night, creating chance after chance and defending brilliantly in an excellent performance. It was always going to be difficult for Norway, and that was the case as they were second best all evening. The Lovene were chasing the ball for the majority of the game, and although they kept Spain down to just two goals they struggled to keep up with their hosts.

Norway had confidence coming to the Mestalla, following a successful Nations League campaign. However, they failed to capitalise on it, leaving empty handed. Nevertheless, they should remain optimistic and still have every chance of qualifying for next year's tournament.

None of the 14 penalties taken by Joshua King (all competitions) were saved. Twelve were converted and two went wide. #ESPNOR

STAR MAN - There was little for Norway to celebrate, with the exception of Joshua King's penalty. The ​Bournemouth forward scored brilliantly from the spot, and although it came to nothing it was the highlight of the evening for the visitors. The win sees Spain go top of Group F, level on points with Sweden and Malta who both won earlier on Saturday. Meanwhile, Norway now sit in fourth, ahead of Romania and the Faroe Islands.

Both sides are back in action next week, when they play their second qualifiers on Tuesday. Spain face Malta in Ta' Qali, while Norway host their Scandinavian neighbours Sweden in Oslo.
Related Topics:
Transfer News