Jadon Sancho's rise from the reserve teams at Manchester City to becoming a household name across the world has been nothing short of extraordinary.

A lot was made about his decision to leave his home country as a 17-year-old in the Premier League, who appeared to be simply frustrated about his lack of first-team opportunities in England.

But Sancho's decision to take destiny into his own hands has been worth its weight in gold, and the Borussia Dortmundstar now has the world at his feet as he enters his final year of being a teenager.

As Sancho celebrates his 19th birthday ahead of England's match with Montenegro, here's a look at some of the best career moments from Dortmund's number seven. Young players moving to a new league will often need time to bed into the first team set up, especially if they're moving to one of the biggest clubs on the planet.

But Sancho needed just nine appearances - five of which came from the bench - before he found the back of the net for the first time at the Westfalenstadion.

The former Manchester Citystar started to make international headlines when he curled a delicate shot past Bayer Leverkusen goalkeeper Ramazan Özcan inside the opening quarter of an hour to open his account not just for Borussia Dortmund, but also for his senior career.

Sancho wasn't finished there either, as he went on to claim two assists in Dortmund's 4-0 win against Heiko Herrlich's side, the first of which left teammate Marco Reuswith his head in his hands in amazement before goalscorer Maxi Philipp had even finished off the move.

Winning the Under-17 World Cup Having lost in the Under-17 European Championships a few months earlier, England went into the World Cup in India as one of the tournament's clear favourites, but with an extra desire to go one step further than they had Croatia.

Sancho had an outstanding group stage run, scoring three of England's 11 goals as they booked their place in the knockout stages alongside Iraq and Mexico.

But it was there that Sancho's tournament ended, as Borussia Dortmund exercised their option to recall their new signing before the knockout stage of the competition so he could be part of their Champions League squad.

England winning the under 17 World Cup and doing it without arguably their best player in Jadon Sancho.

England edged past Japan via a penalty shoot-out, before cruising past the United States and Brazil to set up another clash with Spain - five months on from their defeat to La Roja at the European Championships.

Two goals from Sergio Gómez, who also joined Borussia Dortmund that summer, put Spain into the lead heading into half-time, although

A Phil Fodeninspired comeback then ensured that England's young lions would etch their names in the history books forever, registering a 5-2 win over Spain in the World Cup final.

Moving Ahead of Christian Pulisic Sancho had to wait until the back end of the 2017/18 season to score his first goal for Borussia Dortmund, but the Englishman was tipped for big things much earlier in the campaign.

In his second ever start for the club, Sancho was deployed on the left wing, while famed wonderkid Christian Pulisic was on the right in a tough away match against Hertha BSC.

But even before Sancho set up Shinji Kagawa to rescue a point in Berlin, it was clear for anyone watching that the then 17-year-old winger not only had a higher ceiling that Pulisic, but that he was already a more important player to the club than Dortmund's own Captain America.

Borussia Dortmund left the Olympiastadion with just one point to their name, but the game was somewhat of a turning point for Sancho on his journey to becoming one of the club's most influential players.

Bundesliga Player of the Month If we're being hypercritical, there's one thing which is standing in the way of Sancho being held in the same bracket as Kylian MbappéLionel MessiCristiano Ronaldo It only seemed like a matter of time that Jadon Sancho would be getting a phone call from Gareth Southgate in the aftermath of the World Cup, as England looked to find that missing ingredient to help them go a step further the next time around.

The teenager's chance in the national team came in October, and it was then that fans who don't keep up with the Bundesliga on a regular basis got their first real look at this much talked about winger at Borussia Dortmund.

Sancho was shy in front of the cameras, but that didn't stop him being plastered all over 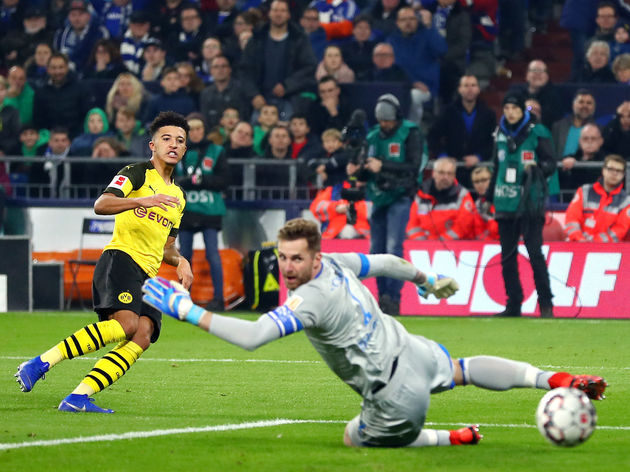 Daniel Caligiuri cancelled out Thomas Delaney's early opener to have Schalkeon course to snatch a point from their bitter rivals, but Sancho raced onto a through ball from Raphaël Guerreiro before slotting a shot past Sancho has given confidence to other players to demand spells outside of the Premier League, and it's the 19-year-old's approach to modern football which will benefit the players, their leagues and their country the most for years to come.