​Zinedine Zidane has reassured Marco Asensio that he remains a key figure at Real Madrid, despite having endured a difficult season at the Bernabeu.

The Spaniard shot to prominence as one of the brightest young talents in Europe under Zidane, but fell out of favour for Los Blancos under Santiago Solari this term. The forward has also suffered from two significant injuries which have further restricted his progress.

However, three years after giving ​Asensio his chance in the senior setup, Zidane has now returned at the helm, and the Frenchman has apparently sought to reassure the 23-year-old that he has a big part to play for his side.

As quoted by ​Marca, Zidane apparently told Asensio: "You're going to be fundamental in this team and I want you here with us."

The ​Madrid board are said to echo Zidane's sentiment, as the club apparently view Asensio as an important player for them moving forward; with president Florentino Perez crucially in agreement with Zidane on the matter. 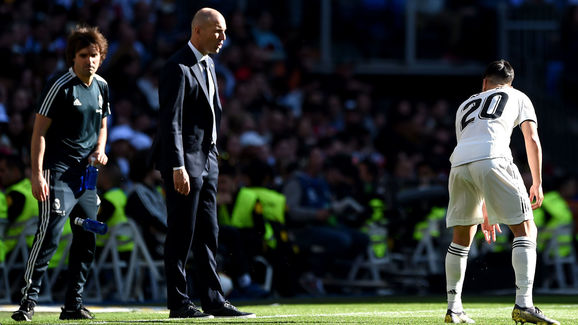 Having largely struggled for consistent game time under Solari this term, Asensio was restored to the starting lineup bu Zidane in the Frenchman's first game back in charge of Los Blancos, as Madrid beat Celta Vigo 2-0 last weekend.

Asensio assisted the opening goal scored by ​Isco, who was also restored to the team by Zidane along with ​Gareth Bale, ​Marcelo and Keylor Navas.

Players such as Asensio, Isco and Bale in particular had seen their futures come under increasing doubt this term, having been made to suffer the consequences for Madrid's poor form this season which has seen them crash out of the Champions League at the round of 16 stage.

Defeat to Ajax left the European champions reeling from a difficult period, but Zidane was brought back to replace Solari shortly after and the club legend has subsequently steadied the ship, with Asensio among those that are already benefiting from the Frenchman's return.