Ronald Koeman's men beat Belarus 4-0 on Thursday and the former Barcelona midfielder will be determined to reach the next European Championship after Dick Advocaat failed to make the previous tournament. While the Netherlands are enjoying a renaissance, having reached the semi finals of the UEFA Nations League, Germany are in disarray - they went out at the group stages at last year's World Cup and were relegated from their Nations League group.

Joachim Low led Germany to the 2014 World Cup and in May last year signed a contract extension until 2022, but he knows results need to improve if he is going to stay in the job for that duration. Starting the road to ​Euro 2020 with a win would be a great way of repaying the faith the German Football Association have shown in him. Hertha Berlin's Niklas Stark and Werder Bremen's Maximilian Eggestein will hope to make their competitive debuts while Lukas Klostermann has withdrawn from the squad after suffering a muscle problem in his abductor during the friendly draw with Serbia.

Leroy Sane was taken off in the same game, after a horror tackle that saw Milan Pavkov receive a red card, but Low confirmed there was no lasting damage.

The Oranje are unbeaten in their last three games against Die Mannschaft, winning one and drawing the other two.

The last meeting between the nations took place in Germany during the Nations League four months ago and saw the away side score two goals in the last six minutes to secure a draw after being 2-0 down. That result meant Germany were relegated to League B of the competition and Netherlands progressed through to the semis.

DUTCH DELIGHT!@OnsOranje's late comeback in Germany earned them a spot in the #NationsLeague finals

The last time the Netherlands overcame a 2️⃣-goal deficit in a competitive match was against England in a #WorldCup qualifier back in 1993 pic.twitter.com/QZ2xBvpaLC

In the reverse fixture, the Netherlands secured an easy 3-0 win with Van Dijk, Depay and Wijnaldum all getting on the score sheet.

The overall record since the nations first met in 1910 reads 11 wins for the Netherlands, 15 victories for Germany and 16 stalemates.

Since losing his first match in charge against England 13 months ago, Ronald Koeman has only lost to the world champions France.

The 56-year-old got his revenge against France in their next encounter and has beaten Peru, Portugal and Sunday's opposition in recent matches. 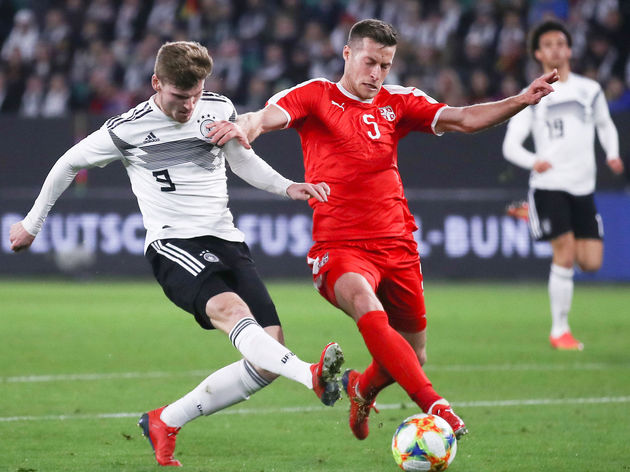 The visitors have wins over Peru and Russia in the last six month but have drawn their last two games.

Here's how both nations have performed in their last five fixtures.

Germany are unbeaten in three games after losing their previous two but the Netherlands are riding a huge wave of momentum and will be too strong for their opponents. The three time European Championship winners have not won away since 2017 and that terrible run will continue here.