10 of the Hardest Players in Manchester United's History

Despite two defeats on the spin, Ole Gunnar Solsjkaer appears to be bringing the good times back Old Trafford during his spell as Manchester United caretaker manager.

The former striker has continually stressed the importance of the club going back to its core principles of attacking football, strong defending and needing an absolute desire to win every match the Red Devils play in.

A number of cult heroes down the years have set the example that the current crop need to match. These players are just some of the many that have made Manchester United the most successful team in English football, as well as at times the most feared.

Here are the 10 greatest hard men in United's illustrious history. His legacy among Man Utd Liverpool A member of the legendary class of '92, Butt wasn't the most vocal of midfielders, although he more than made up for that with his immense tackling ability.

The academy graduate would play 387 times in 12 seasons at United, before being sold to ​Newcastle in 2004. The highlight of those years came at the Camp Nou in the Champions League final in win 1999, where he held the midfield together without the suspended Roy Keane and Paul Scholes. The Irishman spent seven years at Old Trafford in the 80s during a difficult period for the club. His tough tackling and immense physicality, coupled with a great ability on the ball, saw McGrath play over 200 times for the club.

His achievements were even more impressive considering he would often not train during the week due to a persistent knee injury. He was sold to ​Aston Villa in 1989, where he would go on to become arguably their greatest ever player. 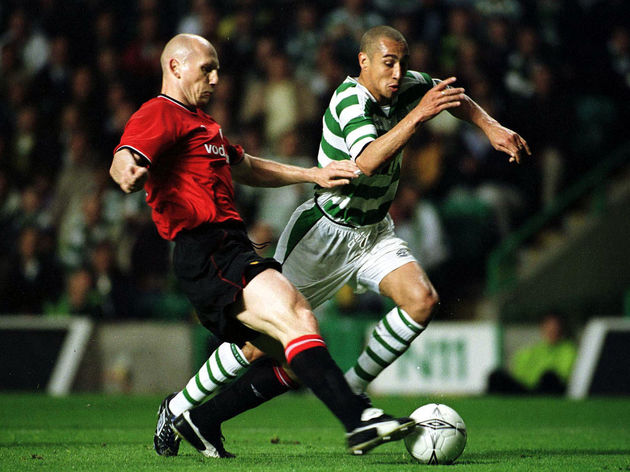 The Dutchman had an imposing look of a man that attackers just didn't want to cross. At 6'3" with wide shoulders and a bald head, Stam had a presence at the heart of the United back line that made the Red Devils one of the meanest defences in European football.

Stam only spent three seasons at United, winning the Premier League in each. Rightfully considered the Premier League's greatest ever goalkeeper, there is perhaps no player more synonymous with the dominant United side of the 90s than Peter Schmeichel.

The great Dane brought a unique personality to the position, and he was famous for berating his defenders if he had conceded a goal, while his amazing ability to collect crosses and fearlessness when closing down attackers was obvious for all to see.

Schmeichel's leadership led to him being captain for that unforgettable night in Barcelona in 1999, where the Red Devils lifted the Champions League with a 2-1 win over​ Bayern Munich. 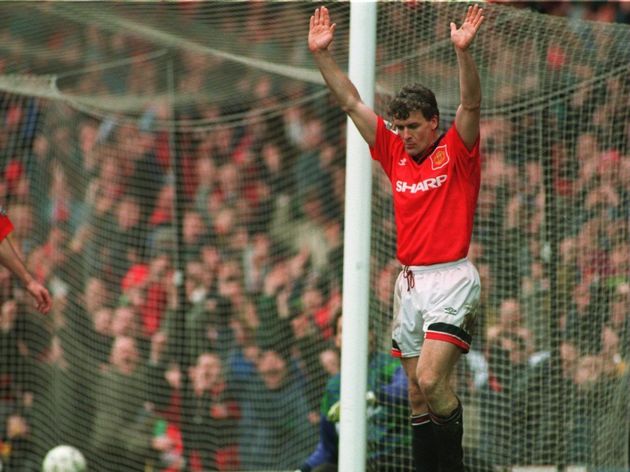 If you've only known Mark Hughes the manager, you could be forgiven for thinking the Welshman likes to do nothing but moan about referees and play 'safe' football.

However, the man nicknamed 'Sparky' was an absolute nightmare for defenders to play against. In his two spells at the club, Hughes scored 163 goals in 467 appearances, but made himself a cult hero for his fight and aggression on the pitch. There's a reason why Robson was nicknamed 'Captain Marvel'. The midfielder was everything you'd ever want in a Manchester United player.

Playing 461 times for the club and scoring 99 goals, his trademark surging runs and tough tackling made him a hero in the red half of Manchester, while also becoming England captain, winning 90 caps for his country. Arguably United's best centre-back in the Premier League era, the Serbian made 300 appearances for the club, winning five league titles, three league cups, the Champions League and the World Club Cup during his eight-and-a-half year spell at Old Trafford.

Vidic was an absolute rock at centre half, and complemented Rio Ferdinand's ball-carrying, skilful style with a no nonsense, uncompromising approach in which he wasn't afraid to do the dirty work.

The two would form would go on to form one of the most feared defensive partnerships in world football. A member of England's 1966 World Cup winning side, Stiles also won two league titles, an FA Cup and a European Cup while at the heart of the Old Trafford midfield.

The boyhood United fan may not have been the star in a team containing club icons such as George Best and Sir Bobby Charlton, but the diminutive Stiles was a true warrior in front of the defence, accompanied by his infamous look of missing several teeth.

Stiles made nearly 400 appearances for the Red Devils, with the now 76-year-old being neat on the ball while fearless in the tackle. A true legend of English football. Keane was one of the great midfielders of his generation and the heart beat of Sir Alex Ferguson's treble winning side in 1999. However, he is perhaps best known for the controversial incidents that has led to his reputation as one of the most feared men in football.

Whether that be squaring up to Patrick Vieira in the tunnel at Highbury while defending his team-mates in 2005, being sent home from Ireland's 2002 World Cup squad, or for THAT tackle Alf-Inge Ha​land perhaps summing up the darker side of his game.

But one thing Keane did posses was an unmatched desire to win. Although he picked up seven Premier League red cards, his work rate, passing and unbelievable tackling made him the complete Ferguson midfielder, and the hardest play to ever pull on Manchester United shirt.