Chelsea manager Maurizio Sarri has claimed his side can still finish in the top four, despite their 2-0 defeat to Everton on Sunday afternoon.

The Blues were beaten by two second-half goals from Richarlison and Gylfi Sigurdsson at Goodison Park, as their poor away form in 2019 continued. They have won just one of their five away league games this year, seriously denting their aspirations of a Champions League spot for next season. Speaking after the game, Sarri described his disappointment with the loss but remained positive about Chelsea’s challenge for a top four finish. As quoted on the club’s official website, he said: “It is not impossible, we need to recover only three points.

The defeat sees ​Chelsea remain sixth in the table, where they have been since their humiliating 6-0 thrashing by Manchester City at the start of February. It is the lowest the Blues have been all season, having been top of the table back in September. 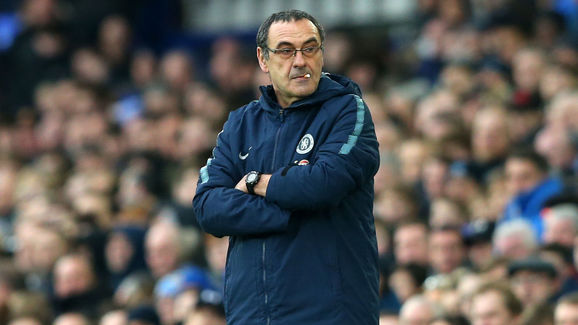 Sarri’s side dominated the first half, having an array of big chances to take the lead. However, they were unable to capitalise on their dominance, and allowed ​Everton a route back into the game – one that ultimately led to their defeat.

Speaking about the performance, Sarri said: “The situation is clear. We played probably the best 45 minutes of the season and then suddenly at the beginning of the second half we stopped playing, without defending, so we were in trouble. Chelsea are not in action until the end of the month, when they travel to Cardiff City on 31 March. The Blues are then back at Stamford Bridge on 8 April, when they host ​West Ham in a London derby.