James Milner was on hand to bail Liverpool out on Sunday evening, scoring a late penalty to secure a 2-1 win over Fulham, sending the Reds back to the top of the Premier League in the process.

Sadio Mane put Liverpool into a first-half lead, but the Reds were unable to break down a resolute Fulham defence and were staring a disappointing draw in the face after former Liverpool man Ryan Babel capitalised on a defensive mix up between Virgil van Dijk and Alisson with just 15 minutes left on the clock. Jurgen Klopp's side were then gifted the chance to restore their lead during the final 10 minutes from the penalty spot, when Sergio Rico clumsily brought down ​Mane after mishandling what appeared to be a routine effort on goal.

Milner stepped up to confidently stroke the ball home and, as shown by this stat from ​Opta, extended an incredible record that ​Premier League 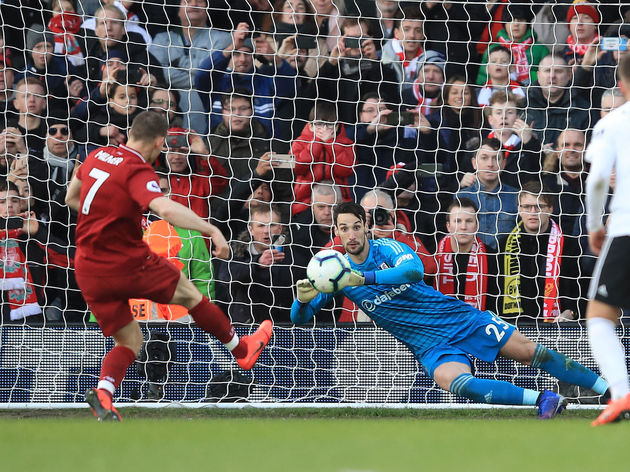 Coincidence or not, that stat demonstrates the fact that Milner is a man that ​Liverpool can depend upon at the most crucial of moments - and explains why Klopp has instilled so much trust in him ever since the Reds snapped him up on a free deal from Manchester City in 2015.

After a blistering start to the season, Milner has suffered a slight dip in form recently and has often been reduced to appearances off the bench. However, with both Naby Keita and Jordan Henderson currently nursing slight knocks, there is every chance that the veteran midfielder will be back into the starting XI once Liverpool return from the international break at the end of March.

Milner's current contract is set to expire at the end of the season and, given the fact that he's showing no signs of slowing down just yet, it would be foolish of Liverpool not to offer him some sort of extension.