​Daniel Levy has insisted that Tottenham's level of investment in the transfer market will not be affected by the club's move to a new home, and has also played down rumours of Nike sponsoring their new stadium.

Levy was speaking at a 'Board to Board' meeting with representatives of the Tottenham Hotspur Supporters' Trust board, and discussed the club's transfer plans as they prepare to complete the long-awaited move to their new stadium.

Loads from Daniel Levy on Spurs' transfer problems, squashing those Nike naming rights rumours and plenty more on the stadium and the money available for transfers after his meeting with @THSTOfficial. https://t.co/VLSbEBVdoy

As quoted by ​Football-London, when questioned whether the costs of the new stadium would have a negative impact on ​Tottenham's transfer strategy and competitiveness on the field, "Daniel Levy said no. The fact that stadium costs had risen does not impact that number.

"Levy said that with a debt of £637m, subject to reasonable assumption on interest rates, the net spend on players would not be affected.

"He continued that Champions League qualification gave more flexibility. There is a certain amount the club wants to invest in the team. If players are sold, that amount increases."

Spurs will continue to spend money on the new stadium for the next 12 months (not including the loan repayments). https://t.co/43QsYktohK

Asked why, then, the club have failed to sign any new players in either of the last two transfer windows: "Daniel Levy said that transfers were tricky. If we could have sold XYZ and found someone better, we would have done it.

"He said he was disappointed that the market was not as liquid as it had been previously. He also stressed the requirement for Tottenham's squad to include more homegrown players. There were squad limits and we had reached the maximum for overseas players. 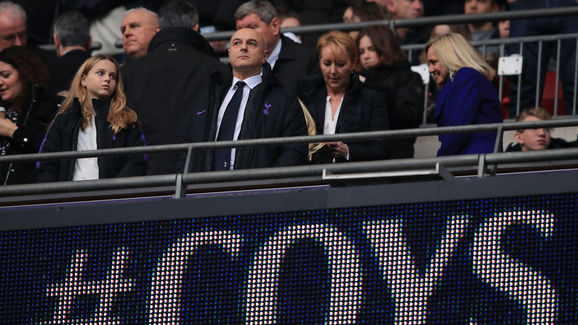 "Daniel Levy said that Mauricio Pochettino wants to win all four competitions but the Premier League and Champions League are the main competitions you're judged on."

The on-and-off situation with regards to when Tottenham will finally completed a prolonged move into their new home as largely dominated the agenda for the north Londoners this term, but recent reports have also speculated that the stadium will be named the 'Nike Stadium'.

In response to those claims, Levy added: "None [sponsorship deals for the stadium] were in place as yet. The club had never been in talks with Nike. Sponsoring stadiums is not what Nike do as a business."