​Brendan Rodgers has backed Jamie Vardy to become a member of the Premier League 100 club, with the former England striker nearly three quarters of the way to hitting a full century of goals in the top flight.

The 32 year old bagged a brace against Fulham last weekend to take his tally to 101 goals for Leicester in all competitions, and now has his sights set firmly on the next milestone. n't want to trap the boy into pressure. For me it's getting him to enjoy his football and when you have that energy and happiness you produce good football. He looks after his life and he's a natural goalscorer.

"He is tactically very good. When you talk to him he's got a real in-built brain for football. You sense that. He watches and studies the game."

Just another chapter in the incredible Jamie Vardy story…#Vardy100 pic.twitter.com/FxIyGSWMHa

With the international break coming up, Rodgers agreed that a step back from the England squad last September was the right decision for Vardy in order for him to lengthen his stint at the top level of domestic football.

Citing how former players have taken the same decision, he said: "

"We've seen Paul Scholes and Jamie Carragher do it, they love their country but they love to play and it is the case that, 'Well if I'm not going to play so much I'll devote my time to my club and my family.' It was probably the right thing for him." 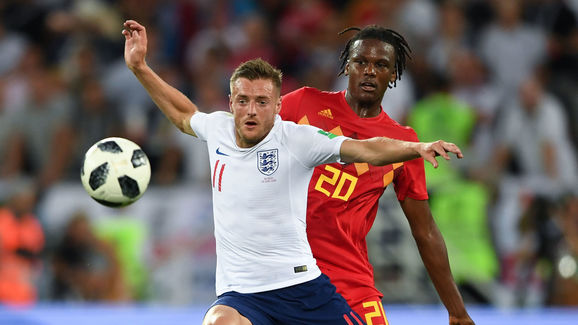 Rodgers has injected a new lease of life into the ​Leicester striker, with four goals in three games since the former Liverpool boss' arrival at the end of February. The Foxes travel to Burnley on Saturday hoping to capitalise on the relegation candidates' recent poor form which has seen them slip to within two points of the bottom three.