Chelsea cruised through to the Europa League quarter-finals on Thursday evening, as they smashed Dynamo Kiev 5-0 at the Olympic Stadium.

The Blues won 8-0 on aggregate, and triumphed in the Ukrainian capital thanks to goals from Marcos Alonso, Callum Hudson-Odoi and a wonderful hat-trick from Olivier Giroud. It was a trademark performance from Giroud, as he took his Europa League tally for the season up to an impressive nine goals. It now means the French striker is the competition’s top scorer this season, one goal clear of RB Salzburg’s Munas Dabbur, who is second.

​Giroud’s nine goals in a season is also the most by any ​Chelsea player in Europe since the 2012/13 season, when Spanish striker Fernando Torres reached the same figure across the Champions League and Europa League.

Although Giroud is recognised more for his assists and overall contribution, he has been key for Chelsea in Europe. His nine goals make up an impressive 36% of goals scored by the Blues in the Europa League, having scored them all in his last seven appearances. 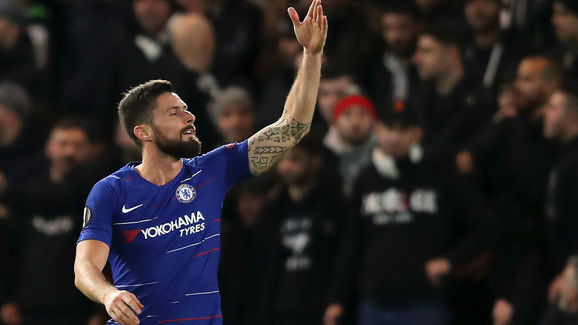 Chelsea are now in the final eight of the Europa League, as they look to win the competition at the second time of asking. The last time the Blues were in the Europa League was in 2013, when they went on to win it in a dramatic 2-1 final win over Benfica.

Giroud’s hat-trick was Chelsea’s second in the competition this season, after Ruben Loftus-Cheek in the 3-1 group stage win over BATE Borisov last October. While Chelsea fans relished seeing an academy product score a hat-trick, Giroud’s feat was special for its own reason.

Having scored with his left foot, right foot and head, the Frenchman scored Chelsea’s first ‘perfect’ hat-trick in all competitions since Didier Drogba in May 2010, when he achieved the feat against ​Wigan Athletic in the Premier League.

It is a fantastic achievement for Giroud, who netted his first hat-trick in a Chelsea shirt in style. Chelsea next travel to Goodison Park to face ​Everton on Sunday, before a trip to Wales as they visit ​Cardiff City two weeks later.