Chelsea qualified for the quarter-finals of the Europa League in style, as they beat Dynamo Kiev 5-0 (8-0 on aggregate) on Thursday afternoon.
Chelsea opened the scoring after just five minutes, as Olivier Giroud poked home from close range. It was a blistering start from the Blues, as they all but secured their berth in the final eight early on.
Giroud got his second of the night just after the half hour mark, slotting home a delightful cross from Marcos Alonso to deservedly double Chelsea's lead. Alonso got his goal moments before half-time, as he finished off Callum Hudson-Odoi's excellent low cross.

It's all over! 5-0 tonight, 8-0 on aggregate and the Blues are heading into the quarter-finals! #DYNCHE pic.twitter.com/HnBd7w3mf2

Giroud got his deserved hat trick just before the hour mark, as he beautifully headed Willian's free kick into the back of the net. It took the Frenchman's Europa League tally up to nine goals, making him the top goalscorer in this season's competition.

Hudson-Odoi capped off an outstanding performance with a deserved goal, as he calmly finished past goalkeeper Denys Boyko to score his fifth goal in a Chelsea shirt.

The result sees the Blues progress to the quarter-finals in style, as they look to win the Europa League for the first time since 2013. The draw for the last eight will be made on Friday afternoon, along with the semi-final draw as Chelsea wait to see who lies ahead next. 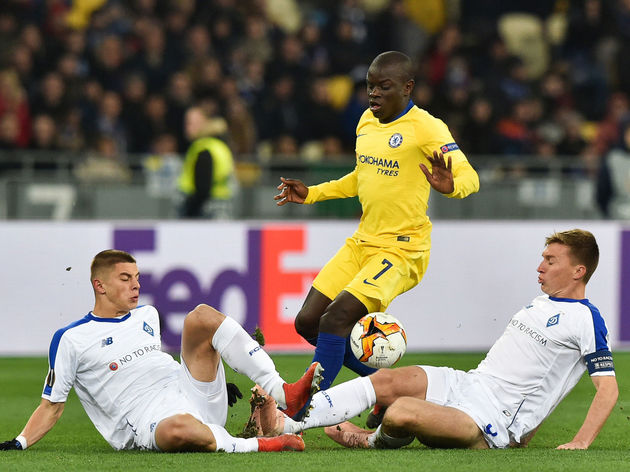 On a night where they needed a big performance, Dynamo Kiev were very poor. They showed no real improvement from their first leg defeat at Stamford Bridge, and were once again underwhelming and lacklustre against the west Londoners.

Although there is no denying that they faced an incredibly tough task against one of the best teams in the competition, the Ukrainians could've at least put up a fight. It was a disappointing defeat at the Olympic Stadium, as they bowed out of European football for another season. 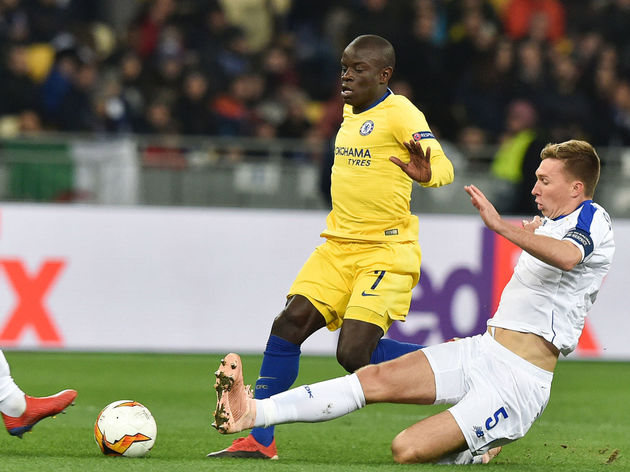 STAR MAN - There was very little quality from Dynamo Kiev on the night, but captain Serhiy Sydorchuk was the Ukrainian's brightest spark. He came closest for the hosts when his shot hit the base of the post, and he stood out on a frustrating night for Dynamo. It was an emphatic display from ​Chelsea, who came to Kiev in strength following a frustrating draw against Wolves last Sunday. The Blues were dominant all game long and played fantastically, producing a fantastic performance to carry on their European journey in style.

There were strong performances all round and some positive football on display, as Maurizio Sarri continues his pursuit for European glory. The scoreline definitely reflects Chelsea's control over the two legs, and they will be delighted to have got the job done in Kiev. STAR MAN - It was a trademark performance from Chelsea striker ​Olivier Giroud, as his hat-trick helped the Blues into the last eight. As well as scoring three wonderful goals he also registered a wonderful assist, as the Frenchman was outstanding in the Ukrainian capital. Now out of Europe, Dynamo Kiev can fully turn their attention to domestic affairs. They are in league action on Sunday when they travel to Olympik Donetsk, before facing a crunch quarter-final tie in the Ukrainian Cup against title rivals Shakhtar Donetsk at the start of April.
After a 3,000-mile round trip to the Ukrainian capital, Chelsea face another lengthy trip when they travel to Everton on Sunday afternoon. After the international break it's another away day for the Blues, when they face Cardiff City on 31 March.
The draw for the last eight of this competition happens on Friday.
Related Topics:
Transfer News