Liverpool booked their place in the quarter-finals of the Champions League on Wednesday evening, with an emphatic 3-1 win over Bayern Munich in the

After a tense start to the match, Liverpool took the lead midway through the first half, as Sadio Mané delicately controlled Virgil van Dijk's speculative long ball, before taking the ball around Here's how the big night unfolded...

Heading into the game, there was a sense that Liverpool could use their potent attacking power to run riot against ​Bayern's aged defence, and give

While Liverpool didn't inflict the kind of aggressive, free-flowing football they unleashed in the completion last season, Die Roten certainly showed their age late on, as their players failed to show the dynamism and drive needed to haul their way back into the tie.

In all honesty, Bayern looked old and tired after 25 minutes. But we made them so. Milner for Robertson next match please.

It was, in truth, a tired looking performance, and the completelyside's Let's be honest, nobody had a particularly memorable game for Bayern, but Thiago showed some real grit and determination in midfield - something that was severely lacking from most of his teammates. He put in a typically diligent performance, and made sure the Reds worked hard for their win.

Of course, it was by no means a classic outing, but he was the man making things happen at stages of the game where his side looked like they could fight their way back into the tie.

Thiago is up there with the most aesthetically pleasing footballers. 

Thiago Alcantara is one player I’d get out of this Bayern team.

When the starting line-ups were announced, it's fair to say that Reds fans weren't exactly over the moon with Jürgen Klopp's rather, shall we say, stodgy selection in central midfield, as he opted to field James Milner, Jordan Henderson and

Well, Liverpool fans were concerned to see Henderson limp off with an ankle injury early on, but his absence didn't seem to affect their efforts one iota, as substitute Fabinho put in another splendid display for his side. The Brazilian gave Klopp's team a tad more dynamism, which proved pivotal in helping them secure the famous win.

And of course, when the Reds needed to shut up shop, the inclusion of the less glamorous midfielders worked a treat, as they managed to superbly nullify the attacking threat of the hosts. 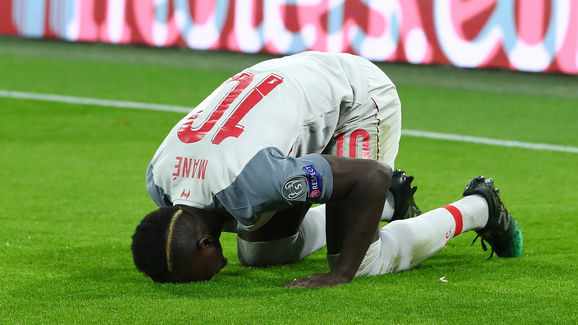 With Mohamed Salah struggling to match the ridiculously high standards he set himself with his goal return last season, Sadio Mané has been the man to step up when it matters, and he put in another blinding performance for his side on Wednesday evening.

His first half goal was one of his finest for the club, as beautifully controlled Van Dijk's pass, before remaining composed in a sea of opposition players, and cooly clipping the ball into the net. He sealed the deal with a fine header to ensure a comfortable end to the game, and was outstanding throughout the ninety minutes.

Sadio Mane is world class, everyone needs to put some respeck on his name

Ronaldo who? When you have Mane pic.twitter.com/xxmEghVYcc

Sensational from Mane and a huge goal for @LFC 

RONALDO IS THE PORTUGUESE MANÉ!!!!

Bayern will look to bounce back from their disappointment next weekend, when they host Mainz in the Bundesliga. Their enthralling title race with Borussia Dortmund looks set to go down to the wire, and big win would go a long way to brighten the spirits of their fans after the Liverpool loss.

The Reds, who are in quite the title battle of their own, travel to Fulham on Sunday, where they'll be hopeful of cruising past the lowly relegation candidates with relative ease.