​Manchester City manager Pep Guardiola has warned that is is 'almost impossible' for his side not to drop points as the Premier League title race heats up.

With just eight games remaining, Saturday's 3-1 win at home to Watford took City four points clear of challengers Liverpool, who are in action against Burnley on Sunday.

The run-in to the end of the season looks set to be a tight battle between the Citizens and Jurgen Klopp's side and, as quoted by ​BBC Sport, Guardiola said after Saturday's victory: "It is almost impossible if we go ahead in all competitions not to drop points.

"We have to be calm and prepare for next week [against ​Schalke]."

Aside from their title challenge in the Premier League, ​City are also on course for both Champions League and FA Cup successes this season.

OFFICIAL: The Premier League have confirmed they are investigating Man City - https://t.co/QvGI6s6SKS

Pep Guardiola has also given his thoughts on the issue. pic.twitter.com/LzlxNcBRcB

Guardiola's side host Schalke in the second leg of their Champions League round of 16 tie on Tuesday, with City leading 3-2 on aggregate after the first leg away to the Bundesliga side.

Having been eliminated from Europe's elite competition by ​Liverpool at the quarter-final stage last season, City will be looking to progress further this term in search of their first European title since 1970.

The Citizens then travel to face Championship outfit ​Swansea in the quarter-finals of the FA Cup next Saturday, with City having last lifted the cup in 2011. 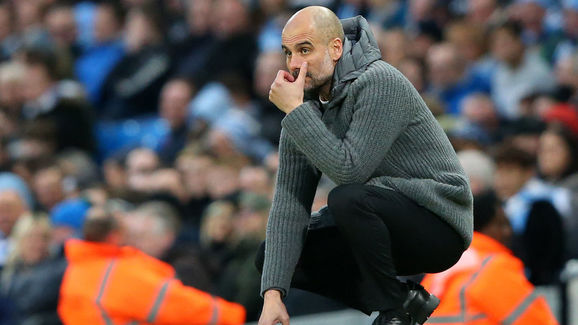 They then travel to face a struggling ​Fulham side at Craven Cottage next time out in the Premier League, with three points a must for Guardiola's side in their quest to retain the title.