​Manchester City manager Pep Guardiola was full of praise for Raheem Sterling but believes he can still improve, as they beat Watford 3-1 on Saturday afternoon.

The Citizens won thanks to a superb hat-trick from Sterling, as he completed his treble within 13 minutes. The win sees City extend their lead at the top of the Premier League to four points, as they have a game in hand over title challengers Liverpool. Speaking after the game, Guardiola described how Sterling can improve. As quoted on the club’s official website, he said: “He can do better. The three goals were fantastic but he can do better. He didn’t help us a lot defensively in the first half and he gave the ball away.”

Nevertheless it was a fantastic performance from ​Sterling, who also registered his 150th ​Premier League goal under Guardiola. It also took the Englishman’s tally up to 18 goals in all competitions, only behind City’s prolific striker ​Sergio Aguero on 25.

After a frustrating first half, ​Manchester City took control of the game at the start of the second half. Speaking about the result, Guardiola added: “We made an incredible performance. It was so difficult but we created enough chances and after the first goal, it was easier.

“Most of the games we play are like this – difficult because the opposition are so organised. We spoke at half-time to make more attacking movements and we did it.”

City only got their breakthrough in the second half, as Sterling controversially scored past Ben Foster. The goal was originally disallowed for offside, but after referee Paul Tierney conferred with his linesman the goal was given.

Speaking about the opening goal, Guardiola said: “The first goal will be debated. I don’t like this situation but it is what it is. I’m sorry if it was offside but we deserved to win. Next season, hopefully, we will have VAR and it will be clear, and nothing will happen.” 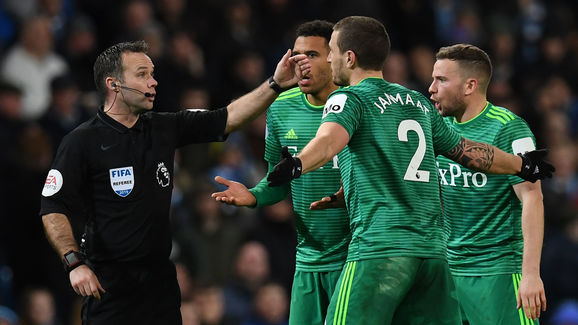 Manchester City now turn their attention to other competitions, as they play knockout ties in the Champions League and FA Cup next week. They start by hosting ​Schalke next Tuesday, before travelling to ​Swansea City next Saturday.