Manchester City went four points clear of the Premier League on Saturday afternoon, as they beat Watford 3-1 at the Etihad.

The Citizens won thanks to a superb hat-trick from forward Raheem Sterling, who completed the feat within 13 minutes and 12 seconds in the second half to secure a vital win for Pep Guardiola’s side.

There was much cause for celebration for the England international, as ​Sterling scored the fastest ​Premier League hat-trick since then-​Everton striker ​Romelu Lukaku hit a treble against Sunderland two-and-a-half years ago.

13:12 - Raheem Sterling scored his hat-trick in 13 minutes and 12 seconds - the fastest in the Premier League since Romelu Lukaku's for Everton v Sunderland in September 2016 (11:37). Blitz. pic.twitter.com/eR6VcrnOmE

Sterling’s performance on Saturday also showed how important he has been to ​Manchester City this season, as they sit top of the table. The 24-year-old has been directly involved in a remarkable 22 goals in all competitions this campaign, more than any other player in the league.

Looking further at how key Sterling is to Manchester City, you must look no further than how his goals coincide with City’s results. He has scored in 52 games across all competitions, winning 50 of them and drawing twice while winning each of the last 34 games.

34 - Raheem Sterling has ended on the winning side in the last 34 matches he's scored in for Manchester City in all competitions. Charm. pic.twitter.com/GV3IeAPOBR

The English winger has played a central role in Manchester City’s recent success since joining from current title challengers ​Liverpool in 2015. He has helped City to a Premier League title and two League Cup triumphs, including one just last month.

Sterling’s influence has transferred to his team, and their recent form has been excellent. City have won ten of their last 11 league games, and their run of six consecutive wins is the longest current run in the Premier League.

Guardiola’s team have also been in fantastic form at the Etihad, capitalising on their home advantage. Manchester City have picked up 45 of the 48 available points at home, winning 15 games and losing just once back in December. 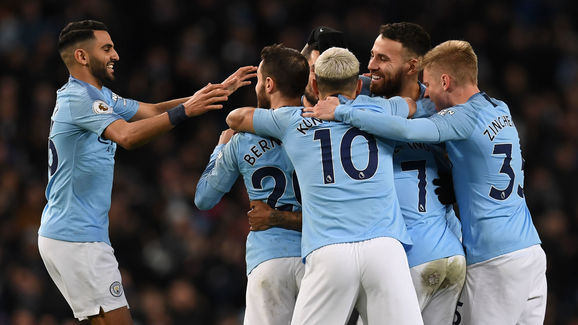 It was another emphatic display from City as they continue their pursuit of back-to-back league titles for the first time in their history. They remain one point ahead of challengers Liverpool after the Reds beat Burnley 4-2 on Sunday.