Bayern Munich produced a ruthless attacking display on Saturday to comfortably dispatch Wolfsburg 6-0 at the Allianz Arena and return to the top of the Bundesliga.

Having struggled to break the visitors down in the early phases of the first half, Bayern found the breakthrough just after the half hour mark as Serge Gnabry engineered some space in the Wolfsburg penalty area to fire Thomas Muller's cross into the roof of the net from close range.

A slick team move saw the home side double their lead just three minutes later. James Rodriguez threaded the ball through to Gnabry, who was in on goal once more, but the German unselfishly squared it for Robert Lewandowski in the centre to tap in a simple finish.

​Bayern required just seven minutes of the second half before adding a third. The influential James Rodriguez drifted towards the edge of the box with typically excellent control of the ball before bending a fine effort beyond Koen Casteels and into the bottom corner.

The home side passed up a number of chances to add further emphasis to the scoreline but finally found a deserved fourth goal with 15 minutes remaining. Another fine team move came to life with some good work from Renato Sanches, before Franck Ribery's incisive pass was flicked home by Thomas Muller.

Bayern capped off an excellent display and a resounding victory as Joshua Kimmich arrived late at the back post to head in the home side's fifth from Ribery's cross, before Lewandowski completed the rout with another well-taken header just three minutes later.

With Bayern level on points with ​Borussia Dortmund at the top of the Bundesliga heading into Saturday's game, Niko Kovac was afforded little margin to rotate his side ahead of Wednesday's huge Champions League encounter with Liverpool.

The Bavarians still have it all to do ahead of the second leg against Jurgen Klopp's side with the scores at 0-0, but the full complement of quality at Kovac's disposal on Saturday certainly paid dividends in Bayern's quest to retain the league title.

#Bayern have taken the top of the #Bundesliga. The way they have been playing it would be hard to see #FCBayern lose another one this season. Kovac has them set up like a machine. It is officially spring time, the time of the season when titles are decided...

#Bayern are just toying with Wolfsburg. Gnabry in particular looks brilliant. #BVB has no more margin for error in the league. None whatsoever.

I like the way you work it #Bayern #FCBWOB pic.twitter.com/DgP8c0fNvo

Wolfsburg pressed the home side with intensity and made things difficult for Bayern early on, but with James Rodriguez and Thiago Alcantara pulling the strings and the potency of Lewandowski and Gnabry in attack, the Bavarians were a class above and their quality made the difference. James Rodriguez and Thiago Alcantara were excellent in pulling the strings for Bayern in the middle of the park, but Serge Gnabry's raw attacking threat made the difference in front of goal.

In the absences of Kingsley Coman and Arjen Robben, Gnabry has assumed the responsibility of providing Bayern's renowned threat from the wide areas with fresh impetus and energy.

What a way to celebrate a new contract ✍️#FCBWOB pic.twitter.com/n03UvBEk4C

10 goal contributions in the #Bundesliga.

Can you smell what Serge Gnabry is cooking!?! ‍ pic.twitter.com/Dmq7ap7K2g 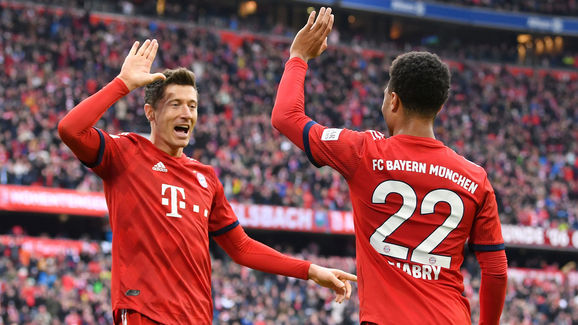 The former Arsenal prospect showed great desire and anticipation to fire in Bayern's opener on Saturday, and showed his class and awareness with the pullback for Lewandowski to get in on the act. Gnabry would surely have scored his second had he shot, but instead proved he is a great all-round asset for the team with an assist to add to his earlier goal. 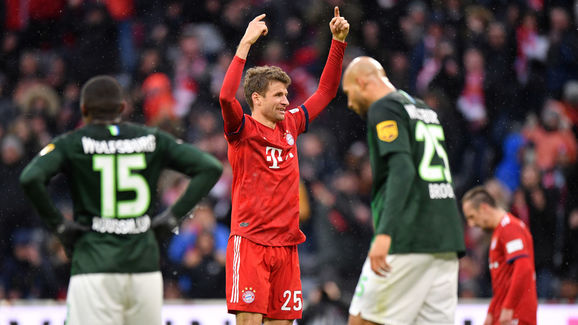 Bayern return to Champions League action next time out as they host ​Liverpool at the Allianz Arena in the second leg of their huge round of 16 clash on Wednesday, with the scores deadlocked at 0-0 after the first leg at Anfield.

The Bavarians then take on Mainz in a third consecutive home game in their next Bundesliga outing next Sunday.