​Borussia Dortmund host VfB Stuttgart in the Bundesliga on Saturday at Signal Iduna Park, with both sides desperate for a victory to ensure that their seasons remain on track.

BVB suffered a shock 2-1 defeat on their travels last week against FC Augsburg, a result that saw rivals Bayern Munich move level on points with the league leaders after their 5-1 victory over Borussia Monchengladbach.

Lucien Favre's side are in danger of seeing their campaign fall apart, and after their elimination from the Champions League at the hands of ​Tottenham Hotspur in midweek, they now face the mental hurdle of picking themselves up for the remaining league games in Germany.

After finishing seventh in the ​Bundesliga last year, Stuttgart have struggled this season and are currently 16th in the standings.

Despite facing the threat of relegation, Die Schwaben will nevertheless head to Dortmund in bright spirits having hammered Hannover 96 5-1 last week.

In a game which could provide the necessary momentum for both sides to go on a much-needed run in Germany's top division, Saturday's fixture promises to be an intriguing encounter.

Check out 90min's preview for the game below.

​Dortmund will be without Maximilian Philipp for their clash against Stuttgart after the forward suffered a serious knee injury earlier this week, whilst full-back Lukasz Piszczek is also doubtful for the match having missed the last five games for the Bundesliga leaders. Defensive midfielder Thomas Delaney and right-back Achraf Hakimi could both return to the starting eleven after being absent from BVB's Champions League defeat in midweek.

Stuttgart could be at full-strength for their trip to Dortmund with their only concern in the full-back position, as Pablo Maffeo is a doubt having missed last week's game against Hannover due to illness.

​Mario Gomez is expected to lead the line for Die Schwaben whilst Gonzalo Castro is likely to feature against his former club alongside Santiago Ascacibar in the heart of midfield.

Dortmund and Stuttgart have met on 101 occasions, with Die Schwaben edging the all-time record with 39 wins to Der BVB's 38. 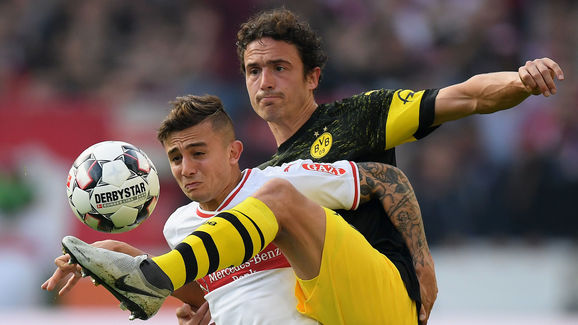 In the corresponding fixture between the two sides earlier in October, goals from Jaden Sancho, Philipp, Paco Alcacer and ​Marco Reus secured an impressive 4-0 away victory for Favre's side.

A victory for Stuttgart on Saturday would be their first at Signal Iduna Park in 12 years.

Dortmund's results in recent weeks have been very poor as a slump in form has seen them pick up just six points from a possible fifteen.

Despite appearing to be back at their fluent best against Bayer Leverkusen two weeks ago, Der BVB were dismal in their defeat against Augsburg last week and are in need of a positive result on Saturday if they are to remain serious challengers for the Bundesliga title this season.

Stuttgart's victory over relegation rivals Hannover last week was their first in the league after eight games.

Markus Weinzierl's side could move above Augsburg with a victory on Saturday, yet they will enter the game as huge underdogs having won just once on their travels this season.

Here is how both sides have fared in their last five league fixtures:

Dortmund's attacking flair this season has seen them score 58 goals in the Bundesliga, and despite their struggles in recent weeks they should be more than capable of scoring against a Stuttgart side who have kept just three clean sheets in 24 games.

However, Die Schwaben will be confident of scoring at Signal Iduna Park following their impressive performance last week, especially when you consider that Der BVB have looked shaky in defence in 2019 having conceded 16 goals in 10 games. After winning the reverse fixture 4-0 at the Mercedes-Benz Arena, Dortmund should prove to be too strong once again for Stuttgart on Saturday in a game that should be a high-scoring affair.

With the likes of Sancho and Reus leading the line, Der BVB will claim all three points, keeping their dreams of a first Bundesliga title since 2012 alive.