​Bayern Munich have become the first team to reach the 4000-goal mark in the Bundesliga after hammering Borussia Monchengladbach 5-1 on Saturday.

Die Roten opened the scoring against their opponents via an early strike from Javi Martinez before Thomas Muller doubled their advantage in the 11th minute.

Lars Stindl pulled a goal back for Die Fohlen, who are currently third in the league standings, yet his side were unable to stop ​Bayern in the second half as Robert Lewandowski restored a two-goal lead.

Confirmed by a tweet from ​OptaFranz, Serge Gnabry's goal which made it 4-1 to Die Roten  was the club's 4000th goal in the Bundesliga.

A late strike from Lewandowski added some gloss to an impressive victory which saw his side move equal on points with leaders ​Borussia Dortmund, who suffered a shock 2-1 defeat to Augsburg on Friday.

Having already held the record for the most ​Bundesliga titles (28), points and victories, Bayern became the first ever team to pass the 4000-goals mark in Germany's top flight since its inception following the merger of the five Oberliga's in 1963.

The achievement is even more impressive when you consider that Die Roten did not play in the newly-formed Bundesliga until 1965, having spent two seasons in the second division before achieving promotion. 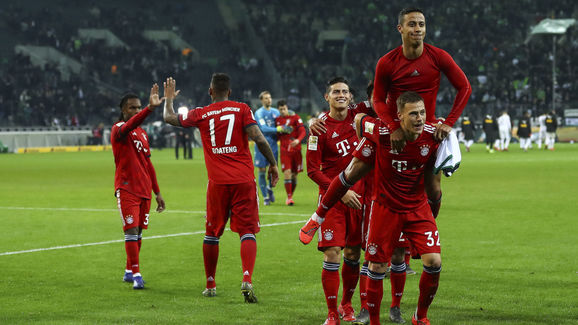 Although this latest record can be linked primarily to the fact that they have never been relegated from Germany's top-flight, the sheer number of goals that they have scored over the past 54 years is testament to their attacking brand of football.

The highest number of goals that Die Roten have ever scored in one league campaign came in 1971/72, as striker Gerd Muller fired in 40 whilst Ulrich Hoeness added thirteen from midfield.

Bayern will be looking to add to their tally of 4001 Bundesliga goals when they face Wolfsburg at the Allianz Arena next Saturday, knowing that a victory could see them overtake Dortmund at the top of the standings.