​Japan powered past Brazil by scoring two goals in four minutes on Saturday, as mouthwatering winner-takes-all finale for the SheBelieves Cup next week.

Brazil headed into the match in need of a response from their opening match - a loss to England - while Japan looked to build on their encouraging draw with the USA. The round-robin tournament sees each side play the other teams once, with the nation with the most points crowned the winners.

Good article by @tonguetweets about what @WomeninFootball means to her. She’s given a huge amount of time to help others over the years #WomenInFootball #SheBelievesCup @90min_Football https://t.co/g2uAVxMudp

At the end of a tense first half, Japan took the lead, as 22-year-old Yuka Momiki lobbed the Brazil goalkeeper with an audacious chip. The hosts hit back midway through the second half, with star forward Debinha smashing home a clinical finish after the ball broke loose from a penalty area scramble.

As the clock ticked down, Japan went for the jugular late on, and Rikako Kobayashi nodded home Momiki's pinpoint cross to give her side the lead. As Brazil rushed forward looking for an equaliser, Japan struck again just four minutes later, as Momiki provided another assist - this time for Yui Hasegawa, who fired home a powerful finish to ensure her side claimed the win. 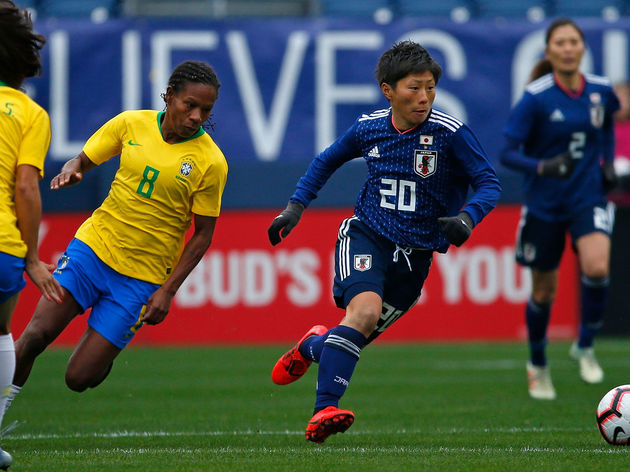 After ​England and the USA drew 2-2 in an absolute thriller, the competition is now delicately poised heading into the final round of fixtures next week. A win for Japan or England would see either side named champions. If the two sides draw, Japan will win on goal difference, while a heavy win for the USA in their clash against Brazil could see them retain the title.

The competition has served as an excellent warm-up for this summer's FIFA Women's World Cup, where the globe's finest sides will compete in the highly-anticipated competition. England are certainly up there with the favourites to win, with their experience of raw talent and experienced winners likely to put them in good stead for a run deep into the tournament.

Brazil certainly have some quality footballtournament