​Gerard Pique has admitted that he intended to make El Clasico 'a little fiercer' after stoking the fire by making a gesture to Real Madrid fans during Barcelona's 0-1 win on Saturday.

The Catalans claimed their second victory at the home of their arch rivals in the space of a week as they edged to a narrow win at the Bernabeu which further tightened their grip on top spot in La Liga.

The happiest team in the world: FC Barcelona  pic.twitter.com/LXwI1HcDHw

In what was a typically feisty affair between the sides, ​Lionel Messi was caught by an elbow from ​Sergio Ramos. ​Pique responded to the incident by making a talking gesture to the home crowd with his hands and, as quoted by ​Marca, the defender said after the game: "I like a warm atmosphere, and I just made it a little fiercer.

"You can see from the replays that it was an assault on Messi, and their fans are complaining all the time.

"I made the talking gesture because they complain many times and then the referees whistle in their favour."

Pique is often central to the rivalry between ​Barcelona and ​Real Madrid during encounters between the two sides, with a combination of political factors and previous encounters making the 32-year-old a key figure in proceedings.

However, Pique insisted: "The intensity doesn't have to be misunderstood. I get along great with all the Real Madrid players, but it's another thing when you're defending your colours. In the end there is mutual respect, when you compare this to previous years it's nowhere close."

✅ Most wins at the Bernabéu as a Barca player.

The victory sent Barca 12 points clear of Madrid in the title race, with Ernesto Valverde's side now well on course for retaining their domestic crown. 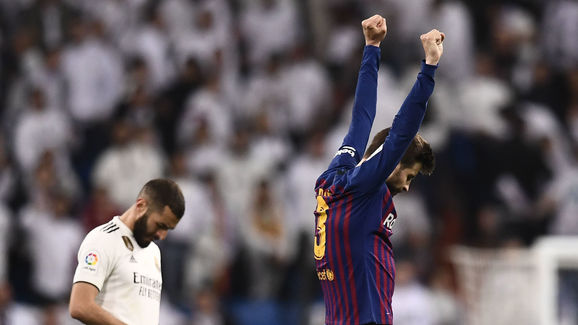