Arsenal missed a golden opportunity to snatch all three points in the north London derby as Hugo Lloris' last minute penalty save ensured Tottenham scraped a 1-1 draw at Wembley.

The Gunners had taken the lead in the first-half through Aaron Ramsey's breakaway goal, only to see their lead wiped out by a Harry Kane penalty with just over 15 minutes to go. 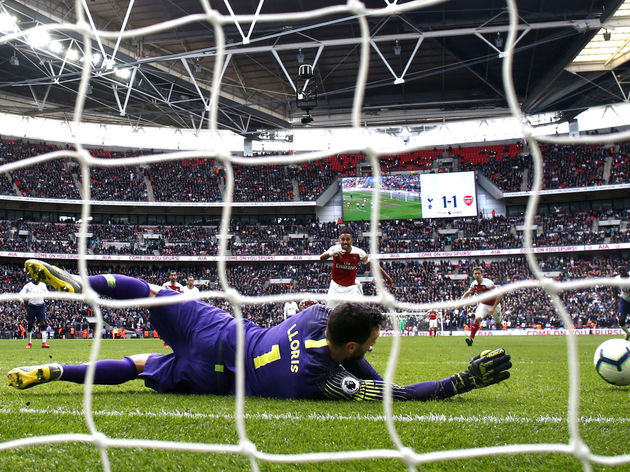 The visitors should have stolen all three points when Pierre-Emerick Aubameyang was awarded a penalty in the last minute, but Lloris' heroics grabbed Spurs a vital point and earned them a share of the spoils in a hotly contested north London derby that saw Lucas Torreira sent off in the dying moments for a high tackle on Danny Rose.

Once again though, controversial officiating dominated proceedings as the need for VAR in the Premier League became even more apparent.

It was anything but a poor performance from Tottenham but they were definitely second best for large spells. Spurs were let down by their star players when they needed them most, with notably poor performances from Christian Eriksen and Son Heung-min.

VAR will be the end of Tottenham. They're always getting dodgy penalties. #TOTARS

Arsenal were brilliant in their approach and it exposed more flaws in Tottenham's gameplan as the hosts struggled to adapt to the demands of the game.

It was a fortunate penalty call that offered Spurs a lifeline and there was certainly suggestions upon watching the replays that Harry Kane should have been penalised in the build-up for offside.

The pressure continues to mount on Tottenham after this performance, and with Arsenal and Manchester United building momentum heading into the final few months of the season, there is a real possibility that Spurs could go from outside title contenders to Europa League qualification candidates in the blink of an eye.

Mauricio Pochettino will still believe in his side though, despite this draw meaning it's just one point of a possible nine for his side.

STAR MAN - Tottenham lacked purpose in their approach and they really struggled to produce from open play. It meant dead ball situations were crucial for Spurs and the man over them Kieran Trippier didn't let them down once.

Every cross into the box was inviting and it's where Spurs profited most in the game. First with the disallowed goal and more importantly in the build-up to the penalty. It hard to imagine them getting the breakthrough without that supply line so Trippier was crucial in sparing Tottenham's blushes.

Unai Emery made headlines before the game with his team selection, speaking about wanting intensity, energy and commitment from his side.

There were a few big names missing but it proved a worthwhile gamble as Arsenal delivered exactly that kind of energetic performance.

If Arsenal defeat Tottenham Hotspur today, then it's one point behind the Spurs. With no strong team left to play, 4th place is a certainty and 3rd place a possibility. #TOTARS pic.twitter.com/AbLMjlebi5

Tottenham simply couldn't match the intensity of the Gunners, struggling to build any kind of sustained momentum throughout the 90 minutes.

Spurs fans when they realise we have still got Aubameyang, Ozil, and Torreira on the bench...#TOTARS pic.twitter.com/5FckWpImF0

The only regret is those star-powered subs let him down with Torreira's red card and Aubameyang's penalty miss. Recent results would suggest that the Gunners are fighting Manchester United for fourth place, but Emery will be wary of ruling out Chelsea as the race for the top four heats up.

STAR MAN - Although Bernd Leno produced one of the moments of the match with a magnificent save, Arsenal's star man came in the form of Henrikh Mkhitaryan The Armenian put in a robust display and demonstrated all of the characteristics that Emery had asked of his players prior to kick off. He covered every blade of grass on the pitch, contributing significantly to both attack and defence. A couple of excellent interceptions in his own area and some precise cutting balls driving the team forward and building momentum.

Tottenham face a Champions League trip to Borussia Dortmundnext where they carry over a 3-0 advantage from the first leg, before they visit relegation-threatened Southamptonin the Premier League.

Arsenal have a big week ahead with the last 16 Europa League tie against Stade Rennais FC before they host fellow top four contenders Manchester United.