​​Liverpool forward Divock Origi has insisted he is more than happy to play as a winger to claim a place in the side.

The 23-year-old Belgian international has found his opportunities limited for the Reds, having being sent out on loan twice in his six years at the club.

But following an excellent display on the left side of Liverpool's front three in their 5-0 win over ​Watford this week, Origi has told Liverpool's official club website that he is comfortable playing in that position. "I liked it," Origi said. "I always said that I could play in all the positions up front. People maybe saw me more in a Liverpool shirt as a striker, but I definitely can play on the wing and I enjoyed the game.

"Starting at youth level I used to play striker and sometimes on the wing, and then one day before the [Watford] game we had a tactical session where we worked on it, so I mixed both experiences.

11 - Divock Origi has had a direct hand in 11 goals in his last 18 Premier League starts for Liverpool (seven goals, four assists). Handy?

"I think I feel comfortable when I’m in that position. Of course I scored a couple of goals like that and because I can play in three positions up front I like to move around and when I turn up on that left side, since I was young that was one of my big qualities. I’m happy that I could show it in such a game."

Origi's strike in midweek was his first Premier League 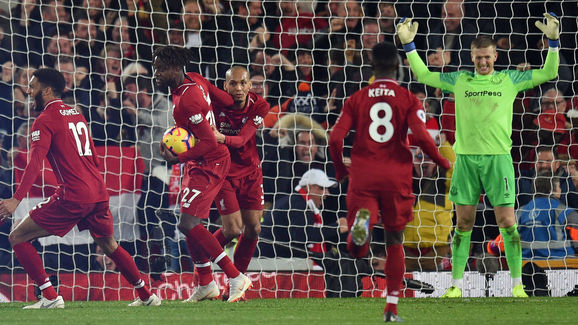