The hosts dominated possession and territory at the Etihad Stadium, yet failed to carve out many clear sights of goal as Manuel Pellegrini's men defended resolutely. However, fortune favoured the champions as referee Stuart Attwell awarded them a spot-kick following Felipe Anderson's collision with Bernardo Silva.

The visitors were left aggrieved by the decision as the contact on Silva appeared to be minimal. The Portuguese's introduction ultimately decided the game, with his incisive passing and clever runs finally giving the opposition genuine cause for concern. 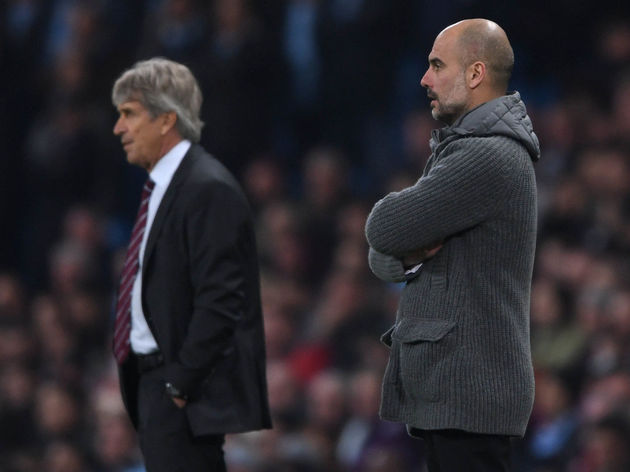 Victory for City keeps the pressure on title rivals Liverpool, whilst the Hammers remain in tenth position, a single point above Leicester City.

This lacklustre display came off the back of an excellent week for the club where they added the League Cup to their ever-growing growing trophy haul and secured an away-leg victory in their Champions League tie with Schalke. Both encounters pushed ​City to their limits and this showed against the Hammers.

Sunday's triumph at Wembley went all the way to penalties, whilst they were forced to dig deep to overcome Schalke late on after being reduced to ten men.

Given these two draining encounters, it is understandable that they looked somewhat toothless when their former manager came to town. Pellegrini and his players certainly didn't make things easy for them as they stood firm for large periods of the match.

The old adage rings true on this occasion; champions win even when they do not play well. This was not stellar City, but they got the job done.

STAR MAN - Riyad Mahrez looked out of his depth down City's right flank. He

Pep's side, who have had 81% possession, are currently losing ground on Liverpool at the top https://t.co/7wLVKaXHjl #MCIWHU

A half of missed opportunities for the blues hitting the post and missing the target on too many occasions! Could it just be one of those days?#MCIWHU ⚒ pic.twitter.com/JmwsQrpFYe

He's been class since coming on 

Despite walking away empty-handed, Pellegrini will be hugely impressed by his team's showing. It takes a combination of passion, grit and focus to hold this City side to just one goal at home. This feat is yet more remarkable when that score comes from a dubious penalty.

This performance also demonstrates the Chilean's tactical nous and understanding of the game. Of course, the players were the ones out on the field who implemented their boss' plan. The defence was excellent and massively restricted their hosts, with particular credit going to Pedro Obiang and Angelo Ogbonna.​

Despite the loss, this was a game that offers huge encouragement to West Ham players and supporters alike. If they can repeat these levels of performance a top-half Premier League finish should be theirs.

STAR MAN - West Ham functioned well as a defensive unit at the Etihad Stadium, with Angelo Ogbonna orchestrating their outstanding effort. The Italian was rock-solid in the centre of defence, inspiring his teammates in what was a valiant display. Regardless of the result, he and his colleagues can leave Manchester with their heads held high.

Pedro Obiang and Issa Diop also made noteworthy contributions, with both players displaying a tenacity and doggedness that frustrated City. However, Ogbonna's performance was immaculate and he was certainly the standout player for his side. He suffocated the home team's attacking threat and ensured that opportunities were at a premium. Neither he nor his fellow defenders can be blamed for the penalty that saw City take the points.

We have not conceded in 45 minutes of football against Manchester City.

Yes. You read that correct.

Man City have scored at least twice in each of their last 15 #PL home matches, the longest such run in the competition#MCIWHU pic.twitter.com/tbdDBre3Jx

Manchester City travel to Bournemouth on Saturday, where they will have the opportunity to return to the Premier League summit. Liverpool do not play until Sunday's Merseyside derby, so the Citizens will be hoping to pile on the pressure before the Reds' fiery clash at Goodison Park.

West Ham host a rejuvenated Newcastle United in Saturday's late kick-off as they hope to solidify their position in the top half of the table.​​