Huddersfield snuck a 90th minute winner against Wolves at the John Smith's Stadium, as they recorded their first win of the Jan Siewart era, and their first since November.

It was the home side who started the brighter, or at least the more hungry, controlling more of the ball and creating a couple of chances on the back of it. And, though with 25 minutes gone, Wolves started to rally, spraying the ball around with their usual quality, their only real chance at goal came from a misguided Raul Jimenez header. And they never built on this, as the Terriers frustrated their opponents right through till the second half. In the 57th minute, the home support thought their side had scored, when Steve Mounie's header crashed into the side netting with the goal gaping.

However, with two minutes of injury time left to be played, the 24-year-old would finally get his just rewards, as Aaron Mooy's cross found its way to him via a deflected effort from Karlan Grant, and the Benin international snuck it home from the floor, cueing pandemonium on and off the pitch.

For 90 minutes it was the same tiresome old story for the Terriers. Possession was had, the fight was there, the desire evident; everything except end product. But that was until, with mere moments to go, the penny finally dropped, and with it the ball at Mounie's feet.

The Benin international swiped it home, and the home side, who remain anchored to the bottom of the Premier League table, could revel in the first win of their new manager, and their first at all since that 1-0 triumph over Fulham in November. It ended a record of seven home losses in a row in the league, stopping short of the nine that Wolves recorded in 2013, and the 10 Sunderland managed between 2003 and 2005. Time to party!

STAR MAN - Karlan Grant. While Mounie deserved his goal when it finally came, he had squandered a fair few before that. Besides, Grant was absolutely everywhere for Jan Siewart's side. The young Englishman joined from Charlton for a measley £1.7m at the end of the January transfer window, and had impressed in his two previous cameos.

Karlan Grant. I'm in love with you. #htafc

Karlan Grant has been the pick of the bunch for me, absolute livewire. Got in behind them a few times, Mounié-Grant could be a prosperous partnership in the Championship #htafc

But Tuesday night offered the first real glimpse of him, and he looked like a real bargain. Industrious and eager throughout, he should be a key figure for Siewart heading into the final three months of the season and beyond.

Frankly, it was a terrible evening for the Wolverhampton Wanderers on their travels. Nuno Espirito Santo's side were lacking almost all of their usual oomph, failing to get a grip on possession and crafting very few big chances because of it. 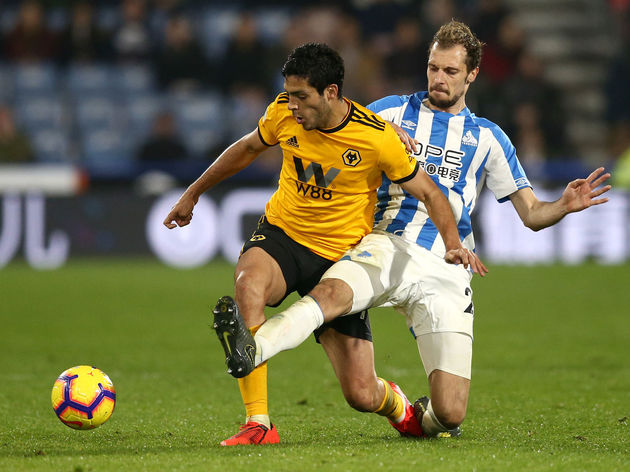 Of course, these kinds of games are the ones that managers notionally struggle to get their team pumped up for at the back end of the season, but with European football on the line, there is still some real skin in the game for Wolves.

​Nuno will no doubt be expecting an immediate reaction this weekend against Cardiff.

43% of Huddersfield's points this season have come against Wolves.

STAR MAN - I imagine very few of Wolves' players will be happy with their performances, especially those who started, so it was left for Morgan Gibbs-White to pick up the pieces when he came on for the final quarter of the game. As is his M.O, he instantly provided his team with some much needed impetus and energy. Unfortunately for him, it couldn't be translated into any tangible gain.

​Huddersfield will travel to Brighton this weekend in the Premier League before hosting Bournemouth the week after, while ​Wolves will welcome Cardiff this Saturday before travelling to London to face Chelsea the following gameweek.