​Liverpool travel to seventh placed Watford on Wednesday night, looking to extend their one point lead over rivals Manchester City.

The Merseyside club were held by bitter rivals Manchester United at the weekend, with Jurgen Klopp's side stuttering slightly in comparison to their early season form, after failing to score for their second straight game in all competitions. ​Watford's last Premier League match saw them run riot in the Welsh capital, as they hammered ​Cardiff City 5-1 at Cardiff City Stadium. Javi Gracia's could prove to be a huge hurdle for ​Liverpool, with the Hornets are currently in the Premier League, and are unbeaten in their last four games in all competitions.

Here is 90min's preview of ​Wednesday's match at Anfield.

Worryingly for Liverpool, Brazilian attacker ​Roberto Firmino hobbled off for Liverpool during their 0-0 draw at Old Trafford. Liverpool hold a formidable record against Watford, with the Reds winning 22 of the 31 meetings between the two teams. Watford only winning five, the last of which came in 2015, with a 3-0 win at Vicarage Road, thanks to an Odion Ighalo double and a Nathan Ake strike. Since that victory for the Hornets, Liverpool have won five of the last six, with the last two meetings at Anfield seeing the home side score 11 goals in 6-1 and 5-0 wins.

The meeting between the two sides earlier in the season saw Jurgen Klopp's team walk out comfortable winners once again, with second half strikes from ​Mohamed Salah, ​Trent Alexander-Arnold and Roberto Firmino securing the three points for the Reds. Both sides are yet to lose a game in February, with Liverpool's unbeaten run dating back to their 2-1 defeat to Wolves in the FA Cup on 7 January, and Watford since their 2-1 loss at Wembley Stadium against ​Tottenham Hotspur on 30 January.

To say that Liverpool's form has faltered of late would seem rather harsh, however three draws in their last four Premier League fixtures has seen their scintillating form at the top of the division slow slightly, allowing ​Manchester City to close the gap between the teams to just a solitary point.

Watford's thumping win against Cardiff City saw them leapfrog Wolves into seventh place in the race for the final Europa League qualification spot, highlighting how terrific a season they have had under Javi Gracia this season. 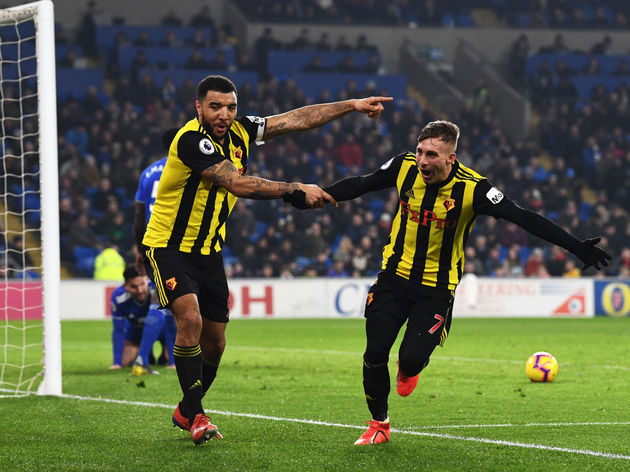 The Hornets' form has also seen them progress to the quarter final stage of the FA Cup, after winning 1-0 away at QPR to set up a tie against Premier League rivals ​Crystal Palace.

Despite Watford's impressive performance during their last match against Cardiff, Liverpool won't drop many points here, mainly due to the Hornet's dreadful record against the Reds. Liverpool's forward line have not found the net in their last two matches, and it's hard to imagine that run stretching to a third game, even if Roberto Firmino is unfit. This could be a great opportunity for Jurgen Klopp's side to recapture some form.