Park Ji-sung: Remembering the Impact of a Man Utd Cult Hero as He Celebrates 38th Birthday

​Park Ji-sung is not a Manchester United legend, nor was he was ever guaranteed to be on the team sheet in any given week. But even seven years after his departure, the South Korean icon remains a cult hero at Old Trafford to the point where his name is still sung by fans.

Park, who celebrates his 38th birthday today (25th February 2019), was at United during the best period in the club's long and storied history and his role in that success alongside more glamorous and vastly higher profile stars like Cristiano Ronaldo, Wayne Rooney, Rio Ferdinand and others should not and cannot be understated.

Having started out at club level in Japan's J-League, Park announced himself on the global stage in 2002 as the Korean team reached the semi finals and eventually finished fourth at their home World Cup. He even scored a famous goal in the final group game against Portugal.

The versatile midfielder found himself on a plane to Europe a year later after Guus Hiddink, South Korea's coach during that magical tournament, took over at PSV Eindhoven, making the move to the Netherlands alongside international colleague Lee Young-pyo.

Park shone for PSV, particularly during 2004/05. In fact, slightly more clinical finishing from the Korean and his teammates in the Champions League semi finals could have resulted in Liverpool facing PSV and not AC Milan in Istanbul. It was that European run with PSV that seemed to bring Park to the attention of Sir Alex Ferguson, who was in the midst of building a new team at Manchester United after falling behind the brand new force that was Chelsea in the Premier League.

The first attempts at rebuilding hadn't worked, with Eric Djemba-Djemba and Kleberson both leaving after making little impact. Roy Keane finally departed around that time, while Nicky Butt and Phil Neville had also left Old Trafford in the summers of 2004 and 2005 respectively.

Park was part of a new look midfield that would continue to be added to in the subsequent summers when Michael Carrick, Anderson, Nani and Owen Hargreaves all arrived, while home grown Darren Fletcher was becoming more established.

Although critics and rivals cynically suggested a far east marketing ploy was the reason behind his arrival, Park quickly ingratiated himself to United fans and Ferguson with his versatility and tireless running, earning him the nickname 'Three Lungs'. Football supporters love nothing more than seeing a player give everything for their club, and Park never left anything out on the pitch. The 2005/06 season saw Park play more games for United than he did in any other during his time in Manchester. He featured in 33 Premier League games, 44 in all competitions, and nearly always finished games on the pitch even if he didn't start them. As time went by and the new team that would soon dominate English and European football took shape, Park's opportunities decreased, although crucially he was no less important in terms of the overall squad.

Where United thrived was the ability for Ferguson to rotate his players and count on top performances from whoever was on the pitch. It relied on players like Park, who weren't regular starters, to put the good of the team above their own egos and give everything to make sure the victories kept coming whenever they were called upon. Football is a squad game, after all.

Ankle and knee injuries actually affected Park for periods during the 2006/07 and 2007/08 seasons respectively. Yet when he did play his contributions were welcome, like rhree goals and an assist in the space of two games against Bolton and Blackburn in March 2007 as United chased a first Premier League title in four years. 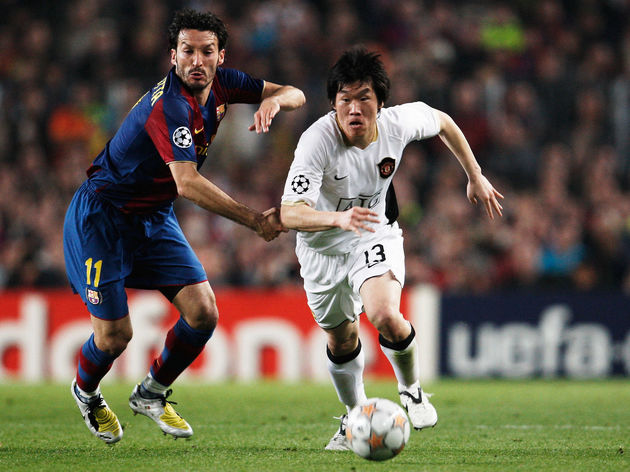 The following year he played 90 minutes in all four legs of the club's Champions League quarter final and semi final ties. The fact that he was then left out of the matchday squad for the final against Chelsea in Moscow came as an enormous shock given his role in getting United there. Speaking about it in 2017, Ferguson acknowledged, "maybe I even regret it to this day."

Rarely left out of a big game again after 2008, Park developed a reputation for scoring goals on such occasions. He notably found the net in clashes against Arsenal, three times, Liverpool, twice, Chelsea and AC Milan, further cementing his cult hero status among fans in a way that perhaps Jesse Lingard in the closest comparison these days. His ability to sacrifice his own game and shut down dangerous opponents if asked to do so by his manager is another of the reasons Park remains so fondly remembered. The most famous example came when he snuffed Andrea Pirlo out of a two-legged Champions League quarter final tie in 2010. The Italian remarked in his autobiography that Park "rushed about at the speed of an electron...they'd programmed him to stop me and that was all he was thinking about."

United won 7-2 on aggregate, with Ferguson commenting in his own autobiography, "When we played [Milan] with Ji-sung Park in the hounding role we reduced Pirlo's strike rate to 25%."

In another part of the book, the legendary United boss even admitted that he regretted not using Park in a similar role in the 2011 Champions League final to stop Lionel Messi and Barcelona.

"I might have been better assigning Park to mark Messi for the first 15 minutes [of the second half] and pushing [Wayne Rooney] wide left. If we had employed those tactics we might just have sneaked it," the great Scot recalled. By 2011, Park was beginning to age. He had turned 30 and United were looking to the future, with Ashley Young arriving from Aston Villa. Park remained until the end of the 2011/12 season, narrowly missing out what would have been his fifth Premier League medal on top of Champions League, League Cup and FIFA Club World Cup honours. He eventually returned to United soon after his retirement in 2014 to become a club ambassador.