Clearly fearing another 6-0 humiliation, Chelsea established their game plan early on as they gifted City plenty of possession but minimal space in the final third. Guardiola's side pressed hard, but could not find a way past the resilient Chelsea defence before the referee blew the whistle for half time.

After the interval, things picked up where they left off. City pushed hard and Sergio Aguero even had the ball in the back of the net after 55 minutes, only for the goal to be ruled out for offside. Chelsea's influence grew as the game progressed, and N'Golo Kante and Ross Barkley both had good chances to break the deadlock, but neither could get the job done. On to extra time. 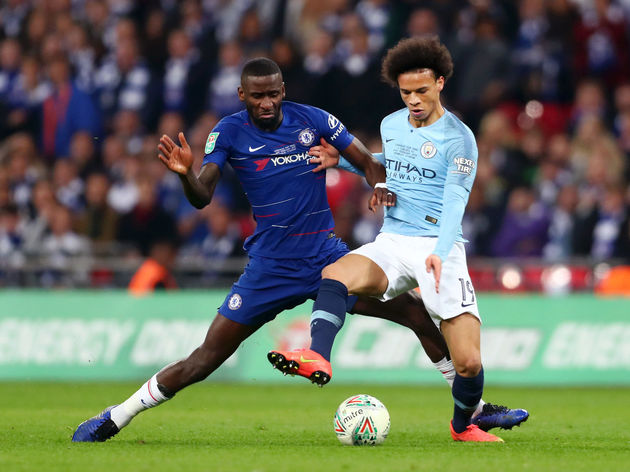 The two sides looked up for the fight, but neither could create any good looks in the first half of extra time. After the break, Aguero and Raheem Sterling were involved in a frantic goalmouth scramble, but could not find a way past Kepa Arrizabalaga, who refused to leave the field despite suffering an injury. The score remained level, and the game went to penalties.

The first penalty went to Jorginho, but his nonchalant effort was comfortably saved by Ederson. Leroy Sane and David Luiz both saw their efforts kept out, but Sterling converted the decisive penalty to win the Carabao Cup for City.

The major taking point surrounding ​Chelsea in recent weeks has been the future of manager Maurizio Sarri. The Italian has faced questions from fans and pundits for his perceived stubbornness, but Sarri deserves credit for changing his team ever so slightly in order to make them competitive.

​Eden Hazard was fielded as a false nine, with ​Willian and ​Pedro as the wingers. Whilst many fans felt Callum Hudson-Odoi should have started, Sarri's decision to go with his senior wingers was vindicated as the pair could used their undying stamina to help the Blues' defence.

Respect to Sarri for completely understanding the game and switching things up. We've defended much better, we were 4-0 down at this stage last time out, just need to do better when we attack and we're good.

Defensive compactness is a lot easier when Marcos Alonso isn’t out there. Glad Sarri has realized.

Full-backs Emerson and ​Cesar Azpilicueta stayed deep, instead of pushing high up the field, giving ​City very little space in which to operate. It wasn't pretty, but it needed to be done. Even Sarri's substitutes were different, and he deserves a lot of credit for getting his decisions right.

Although, as Kepa disobeyed his manager and remained on the field for the penalty shootout, Sarri cut an irate figure, and it remains to be seen how Chelsea will deal with the fallout of this incident. Could this be the end for Sarri?

Against City, any defender is usually in for a tough time. However, ​Antoinio Rudiger looked to be relishing the encounter, and often looked to be an impenetrable force.

Within the first minute Rudiger could be seen chasing down City's attackers, and his work rate continued throughout the entire contest. He won tackle after tackle, as well as countless headers, to prevent City from creating much of note.

It was a dominant performance from Rudiger, and fans jumped on Twitter to express their delight at his performance.

Say what you like about Rudiger, he leaves nothing left to give on the pitch. Personalities severely lacking in this current Chelsea squad. #CFCMCI

Another Wembley masterclass by Rüdiger? I think yes.

After the 6-0 destruction of Chelsea in the ​Premier League, City had every right to feel as though they would waltz to the cup here. However, a different Chelsea turned up at Wembley, and City found themselves struggling to create chances, which will certainly be a concern for the perfectionist in Guardiola.
Both ​David Silva and ​Kevin de​ Bruyne were given almost no space in which to operate, meaning City were often looking to create without either of their star midfielders. As the game grew, so did Chelsea's confidence, and most of the game's best chances fell to the Blues.

Given City’s record in finals, this is poor by their standard. especially against this struggling Chelsea side

It is very unlike Guardiola's side to be so ineffective at both ends of the field. They made very few errors, but they failed to rise to the task at hand at Wembley. The quadruple is alive, but only just.

Oleksandr Zinchenko may have been the most inexperienced member of the City starting lineup, but you wouldn't have guessed it by his performance on Sunday.

The occasion certainly did not get to the 22-year-old, who was effective at both ends of the field. Defensively, Zinchenko was rarely caught out, and he also did all he could to get involved in attack. He does not boast the same creativity as Sterling or Leroy Sane, but his use of the ball often posed problems for Chelsea.

It was an assured performance from the Ukrainian, and fans were eager to praise him on Twitter.

I don’t care who wins. (I actually do. God pls) but Zinchenko has been very very impressive today. Amazing!! #CHEMCI

Zinchenko has had an epic game so far...#CHEMCI

For an attacking mid who is a kid, Zinchenko has amazing bottle at LB

Chelsea will have little time to dwell on their defeat as they will welcome ​Tottenham Hotspur to Stamford Bridge on Wednesday.

As for City, once their celebrations are over, they will host ​West Ham United on the same day, as they look to take the festivities to the Premier League.