The Atlanta-born rapper Future raps about many, many things in the song 'Krazy but True', from his latest album 'Future Hndrxx Presents: The WIZRD', but, weirdly, the form of Son Heung-min and Paul George in the 2018/19 Premier League and NBA seasons respectively aren't one of them.

Which is weird, because the following statement is undoubtedly both 'crazy' and 'true', though you might have to whisper it: Son and PG3 have been the the best players in their respective leagues so far this season.

It is also understandable, though. Because this has been a slow unveiling. No coronations have been set, or confetti thrown. It has been a quiet, very gradual process of elimination, and there's been no shortage of competition. In both leagues, this competition has taken the form of two towering rivals. In the English corner we have Virgil van Dijk and Sergio Aguero, probably. In the American corner we have Giannis Antetokounmpo and James Harden - who are thankfully far more set in stone.

Son and George occupy the third spots, and depending on your opinion, will grade anywhere from three to one. But here's why they deserve nothing but the top spot.

To say a player is perfectly made for the time he inhabits is not a novel, or in fact necessarily clever thing to say, but it is unequivocally true in the case of this unlikely pair. Before setting out their similarities, however, it's worth painting the picture of their differences.

George has been an established top 10-15 player in the league ever since 2013, when he won the Most Improved Player award, was included in the Eastern Conference All-Star team as well as the All-NBA Third Team and NBA All-Defensive Second Team. 11 such recognitions - or better - have followed.

Son has not been similarly touted throughout his career. He was a £22m signing. An instant success, he was not. In fact, so unflattering was his first season with Spurs, he begged Mauricio Pochettino to allow him to depart London for increased opportunities.

Contrastingly, in George's formative years as the ringleader of the Indiana Pacers, an MVP was certainly not beyond the realms of possibility for a player with his potential. The kicker came during the 2014 off-season when, having been selected for the U.S. National Team's squad for the FIBA World Cup, George suffered a compound fracture of both bones in his lower right leg.

That medical assessment basically translates to one of the worst leg breaks you'll ever see. It's so sickening, I won't even link it, for your health, but if you're into that kind of thing, have at it.

In any case, as any sports fan will know, such an injury can have a drastic affect on a player's career and trajectory. What appeared his ceiling before the incident seemed fanciful after. Questions were raised, and even though - having returned for the final six games of the 2014/15 season - George enjoyed his greatest statistical season to date in 2015/16, the parameters were different. He could never be the leading man his precocity had suggested.

A move to the Oklahoma City Thunder followed in 2017, whereupon he nestled firmly behind Russell Westbrook - who was coming off the most individualistic MVP win in the league's history - in the pecking order.

He was a Scottie Pippen now, not a Michael Jordan. Or, alternatively, he was Chris Sutton, not Alan Shearer; Daniel Sturridge, not Luis Suarez; Nicolas Anelka, not Didier Drogba. All good players in their own right, but incapable of being the number one guy, forever banished to be the second (or third) greatest player on a title winning team.

Of course, such expectations were never even considered for ​Son. He was a sparky player at Bayer Leverkusen, capable of the extraordinary at any moment, but these moments were never strung together. He was an ethereal, drifting player, not a backs-to-the-wall, take-the-team-on-your-back player.

Needless to say, George's first season followed this arc to a tee, translating to minimal team success as OKC were bounced by the Utah Jazz in the first round of the play-offs in relative ignominy. PG13 was expected to make good on his pledge to join the Los Angeles Lakers at the arrival of his free agency, whereupon he would retain his role as ancillary to any number of superstars, from Kawhi Leonard (now of the Toronto Raptors) to LeBron James (now of said Lakers).

But that didn't happen. Against all (slightly murky) odds - because the tapping up of upcoming free agent targets is a serious offence in the NBA, honest - he stayed with the Thunder. And this second season for George, and fourth for Son, has been transcendent. In both cases, it has come about through the inefficiencies, or straight up absences, of others. 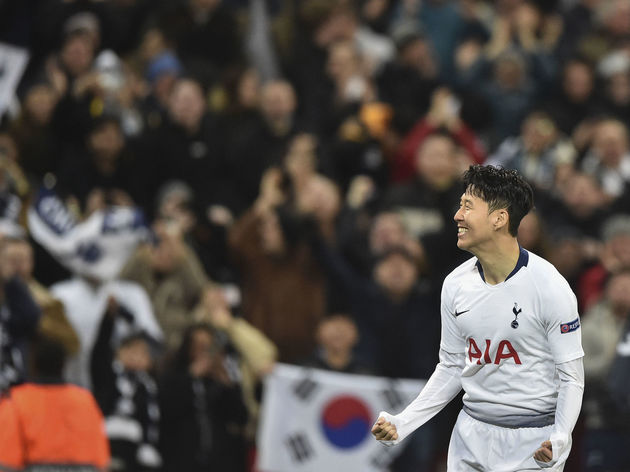 With Westbrook in the midst of a historically bad shooting year, it has been up to George carry the team. For Son, the mantle has been handed down thanks to the long-term injuries of Harry Kane and Dele Alli. Yes, he'd been exceptional before that, but now he had to do it without his feted English duo.

As his previous awards recognition for defensive acumen imply, George's excellence has come at both ends of the floor. Yes, his crowning moment may have come in the towering offensive performance against the Portland Trail Blazers, where he registered a monster triple-double of 47 points, 12 rebounds, 10 assists and two steals, but he maintained his defensive poise.

"He’s at a completely different level. It’s hard to even explain.” And he's not the only bowled over by George this season, with Damian Lillard singing a similarly tune that culminated with the statement: "that dude, he MVP."

While it would be inaccurate to suggest Son's success has stemmed from a similar defensive crux, he has provided his team with something far more invaluable in the moment - undying 'clutchness'. Where it was always ​Harry Kane who was asked, no, required to fulfil that role before, Son showed his capabilities time and time again.

The 16 goals and nine assists he has recorded are impressive on their own, but even more outstanding when you consider their context. ​Tottenham have won all 13 games that Son has scored in, with four of those scores deciding the context outright, and two further decided by his assists.

In the six games he's been forced to miss through international duty this campaign, Spurs have lost three. In the four games that Kane has missed and Son has been available, they have a perfect record.

This is why these two players deserve the individual acclaim. No one has traversed the road from auxiliary to primary as they have this season, at a time when the success of both teams (in both the present and the future) hung so desperately in the balance. It is this specific value to their clubs that makes them unrivalled.