Maurizio Sarri would reportedly be cheaper to sack than any other Chelsea manager during the Roman Abramovich era, with the club only needing to pay £5m to get rid of the Italian.

Chelsea have lost four of their last eight games in all competitions, bringing enormous pressure on Sarri just seven months after he was appointed to replace the dismissed Antonio Conte.

Speculation is rife that the club hierarchy is considering his future. But if Chelsea really are to prematurely get rid of Sarri, The Sun declares that the payoff would be 'just' £5m, compared to the eye watering £18m compensation for Jose Mourinho in 2007, and around £12m each for Luiz Felipe Scolari and Andre Villas Boas in 2009 and 2012 respectively.

In total, the tabloid estimates Chelsea to have spent an enormous £89.3m on sacking managers since Roman Abramovich bought the club back in 2003. Sarri would be cheapest yet.

It was rumoured earlier this week that he might have two or three games to turn it around and avoid the humiliating fate, but new gossip claims it could be only one more and he's out. 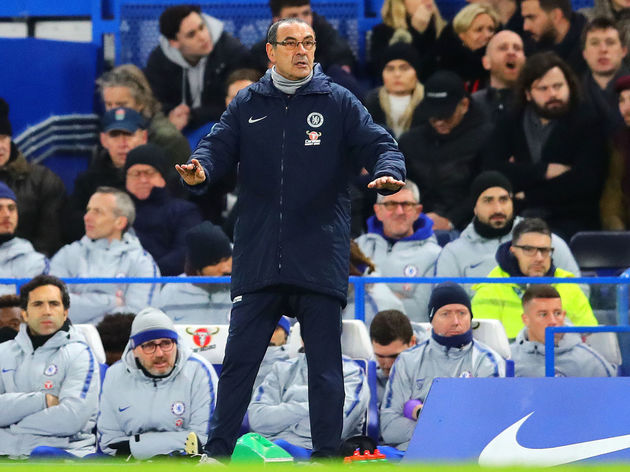 The British press love a managerial sacking in the same way that people in the Middle Ages loved a public execution and the knives are well and truly out for the Italian, who hasn't yet been afforded the players or time to implement his system at Stamford Bridge.

According to a bold claim from the Daily Mirror, Sarri is so close to the sack that he will be dismissed if Chelsea are beaten by Manchester City in this coming Sunday's Carabao Cup final.

The report describes Sarri as a 'dead man walking', with Chelsea fans appearing to turn on him by chanting 'f*** Sarriball' during Monday's defeat by Manchester United.

Wenger to replace Sarri at Chelsea?

According to Sky Sports, Chelsea are already considering who should take charge if the trigger is pulled. Current assistant manager Gianfranco Zola is an apparent candidate for the interim period, a move that could spark memories of Roberto Di Matteo taking over in 2012.

Real Madrid​ Even Arsene Wenger has emerged as