Maurizio Sarri has come under fire in recent weeks after a handful of awful performances across all competitions. The centre of the criticism is the inconsistent application and lack of adaptation of his famous 'Sarriball' tactical approach.

Many Chelsea fans have become fed up with the 4-3-3 system, making themselves heard with a strong chant during the match against Manchester United.

However the outcomes of the Blues' recent matches have raised the big question: Can the current crop at Chelsea even play Sarriball?

Boos ring out around Stamford Bridge. Not from the United fans though. They're heading to the quarterfinals as it stands. pic.twitter.com/dpOlTbNWh9

Chelseahave consistently lined up with Marcos Alonso, David Luiz, Antonio Rudiger, and Cesar Azpilicueta. The role of the outside defenders in Sarri's system is to provide width and create passing angles for the central defenders. The central players must be good on the ball and have the ability to thread passes in between the lines to break an opponent's press.

Alonso plays a very important role in this system. Because Sarri's teams tend to attack on the left, Alonso must overlap Eden Hazardwhile going forward as well as provide defensive cover. This shows off a major weakness in Alonso's game. Throughout the campaign, he has shown a lack of pace to deal with opposing counter-attacks and a serious lapse of defensive positioning on many occasions. 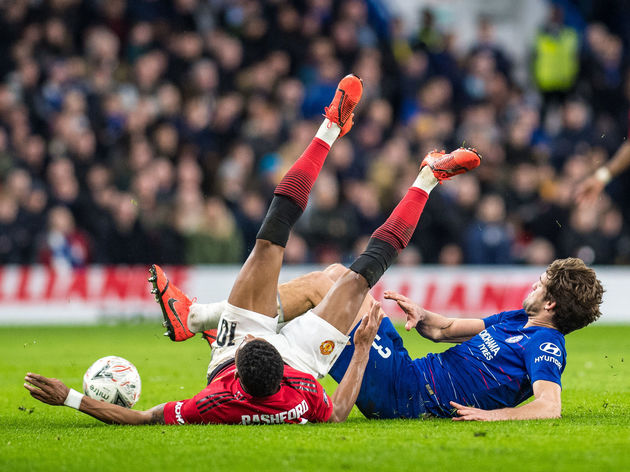 The centre-back pairing hasn't been particularly poor going forward this season, but they tend to switch off their minds during a match and allow weak goals against them. Luiz's vertical passing ability has made him a regular in the side, despite his defensive duties being well below par.

The midfield three used by Sarri is the focal point of his whole system. When the manager arrived at Chelsea he brought with him Jorginho, the midfielder who pulled all the strings for his squad at Napoli. Jorginho has sat as the deep-lying midfielder every match this season and was extremely effective early on. Supporters of the club have been very sceptical of this move because the club has arguably the best defensive midfield player in the world in N'Golo Kante.

While Jorginho has worked in Sarri's system in the past, he has changed his game to exclusively include negative passing. At this point in the season, Jorginho has registered zero assists in all competitions.

One positive impact of Sarri's system has been using Kante in a shuttling role in the midfield. Kante has been given more license to move forward and has achieved career-highs in goals and assists. Despite not playing in his favoured position, Kante has still been the Blues' most consistent performer.

The attacking players in Sarriball have very specific duties assigned to each one of them. On the left side, Hazard is expected to create for the entire team. He is allowed to drift inside for Alonso to overlap him and connect with the number nine. Hazard's role puts a lot of pressure on the Belgian as he is expected to make sure Chelsea score goals. He needs to be dynamic in possession, but know when to utilise his teammates when he is overwhelmed. On the right side Willian or Pedro are supposed to provide width to the team, staying much closer to their touchline. By staying this wide, they are opening up space for Hazard to cut inside and create chances for himself or his teammates. Both players have not shown the ability to play this style of football and it is becoming clear that neither can mirror the success of Napoli playmaker Jose Callejon.

Gonzalo Higuainhad his best goal-scoring season under Sarri at Napoli so it made perfect sense to bring in the Argentine forward in January. In just a few matches for the Blues, he has shown the ability to connect with Hazard through the middle, as well as make intelligent runs behind the opposing defence. With just a small sample size, Higuain looks like he could work again in Sarri's system in London. At this point in Sarri's tenure, his tactics should be showing much more in each match. Some players seem to be understanding the system while others like Alonso, Luiz, and Willian do not seem to be on the same wavelength as the manager. Chelsea fans need to be patient and let Sarri try to bring in players he believes can be successful within his game-plan.

With the backbone of Sarri's team unable or unwilling to follow his tactical approach, it seems that it will take either a change of manager or a change of players for Chelsea to get back on the road to success. If the Blues' hierarchy want to stick with their original game plan and see Sarriball unfold at Stamford Bridge, they will need to give him a few transfer windows to let him tweak the squad until he can get it right.