With only one season of top flight football to his name, Kante was a complete unknown when he joined for Leicester for barely more than £5m in 2015. He was a crucial member of the Foxes' fairytale Premier League title win that season and was quickly transferred to Chelsea for £32m.

Remarkably, the midfielder performed even better in west London, scooping a second Premier League title in as many seasons and becoming the first player to do it with different clubs in 24 years. He also completed a clean sweep of the PFA, FWA and Premier League Player of the Year awards, prestigious individual prizes almost always handed to attacking players. As a team, Chelsea failed to maintain that level in 2017/18 but the criticism wasn't directed at Kante. He was as good as ever and capped off the season by winning the World Cup with France, a key starter throughout for Les Bleus.

Kante was not simply a flash in the pan after that dream season with Leicester and is now firmly established as one of the best defensive midfielders in the world.

This season has been vastly different for the 27-year-old. In his determination to put his own stamp on Chelsea, understandably so, Sarri has changed the system at Stamford Bridge. But Kante has been a casualty of the new style, pushed into a wider position slightly higher up the pitch by the manager after Jorginho was brought in as a deep lying playmaker.

The problem for Chelsea is that Kante is no way near as effective in his new role. He isn't by nature an attacking player and so cannot make the most of receiving the ball in space further up the pitch, while he remains better defensively than Jorginho, able to cover more ground and sweep up any danger. Out of that central role, Kante has become something of a passenger. 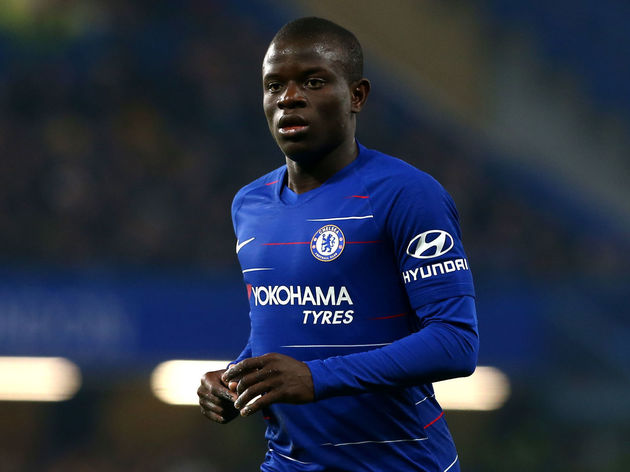 Although far from the type to kick up any kind of fuss, it is would hardly be surprising if the gossip is true and Kante is thinking about moving on. He shouldn't have any shortage of suitors and Real Madrid, Barcelona and Bayern Munich are the clubs immediately linked with the Frenchman, while Paris Saint-Germain tried and failed to beat Chelsea to his signature in 2016 and would almost certainly be interested should there now be an opportunity to complete a deal.

Manchester United haven't been credited with interest, but Kante would be an absolutely perfect addition to a resurgent squad at Old Trafford, one of the final pieces of the long incomplete jigsaw.

Kante is certainly a proven winner and isn't the kind of player to disrupt a dressing room. If anything, he would command instant respect given his achievements, humility and work ethic, making him an immediate asset to the squad and dressing room.

United may be crying out for a top centre-back over a midfielder, but a world class shielding player to sit in front of the back four would be a huge defensive boost in itself. Then there is the transfer logic that if an exceptional player who could improve your team in any way becomes available, buy them, even if they were not necessarily what you have been looking for.

Cynics may question whether would Chelsea even sell, especially to a domestic rival? The answer is quite possibly yes, because they haven't exactly been too worried about doing it in the past as long as they have suitably served their own interests in the deal. Take Juan Mata, for example, Chelsea's two-time Player of the Year, sold to United in January 2014 for a £14m profit because he was no longer needed. Two-time Premier League winner Nemanja Matic was then allowed to join United in 2017 after Chelsea almost doubled their money on the Serbian, bringing in a player in Tiemoue Bakayoko they believed was an upgrade.

Petr Cech and Romelu Lukaku are players who have been sold for profit within the Premier League when deemed surplus at Stamford Bridge.

If United were to chance their arm and offer a figure in the region of £70m to £80m, a not unreasonable figure for an elite player and certainly affordable at Old Trafford, there is at least a chance that Chelsea might see it is an opportunity to turn a big profit and use that money to boost their transfer budget to help buy the right personnel to make Sarri's system work.

Kante serves little purpose underperforming for Sarri if he is a saleable asset that can generate income to improve the squad. Chelsea more than most have been exponents of that more pragmatic and business-like approach to football in recent years. At United, Kante would provide a different option to Matic and Ander Herrera in the centre of midfield, where mobility and pace is lacking, and is a player proven to work well with Paul Pogba.

There is no question that over whether a player of his tireless running would become a cult hero, popular with fans in the same way that Park Ji-sung once was and Herrera currently is.

If Kante really is thinking about leaving Chelsea, United should see it as a no-brainer.