In this new era of pressing from the front, and delivering high intensity performances week in and week out, the modern day Premier League player covers more ground than perhaps any other time in history.

Whether it's players fighting for the title at the top of the table, or fighting to avoid relegation down at the bottom, it really is all about work, work and more work.

Below is a look at the top ten players in the top flight with the most distance covered this season. The first of three ​Crystal Palace players to feature on this list, Andros Townsend has embraced the high work ethic that manager Roy Hodgson demands.

Having broken on to the scene with both Tottenham and England for his penchant of long range wonder goals, the 27-year-old has now improved the defensive side of his game immeasurably, helping out his full back counterpart as and when he can. Arguably the one position you wouldn't normally associate with covering a lot of distance in a game, Sigurdsson has seemingly redefined what a traditional no.10 should offer off the ball.

Whether it's going to hustle opposition centre-backs, or coming back into central midfield to help out his teammates, the Iceland international is a fan favourite at Goodison Park for his hunger and desire to press from the front. The second man to feature from Selhurst Park, McArthur is about as a non-stop runner in the middle of the park. The Scottish international was a key component during Wigan's run in the Premier League, and now with the Eagles, has added an end product to his game too.

The 31-year-old has scored twice this season and provided three assists, whilst his all-action displays have also seen him pick up five yellow cards. In an all-conquering team packed full of superstars, ​City's pint-sized Portuguese star is undeniably the side's unsung hero. Such has been ​Silva's impact and value to the team, Pep Guardiola has been reluctant to use the electric Leroy Sane ahead of him.

The ex-Monaco winger has huge amounts of technical ability, but his lung busting work off the ball has been one of the more impressive highlights this year - particularly in an outstanding performance against title rivals Liverpool at the Etihad earlier this year. With ​Chelsea boss Maurizio Sarri insisting on having his full-backs bomb forward at every opportunity, it comes as no surprise that Marcos Alonso features on this list. With the need to go back and forth for the entire 90 minutes, and the added fact that defenders are rarely substituted, the Spain international has racked up an impressive 284.3km in just 25 games this season. With N'Golo Kante's departure from the King Power Stadium leaving a huge void in central midfield, the Foxes' signing of 22-year-old Ndidi could prove to be a masterstroke in years to come.

The Nigeria international arrived in a £17m deal from Belgian side Genk, and has been impressive with his box-to-box work for the club. Strong in the tackle, and possessing a vicious long range strike in his arsenal, Ndidi could be the driving force of Leicester's midfield for several seasons. 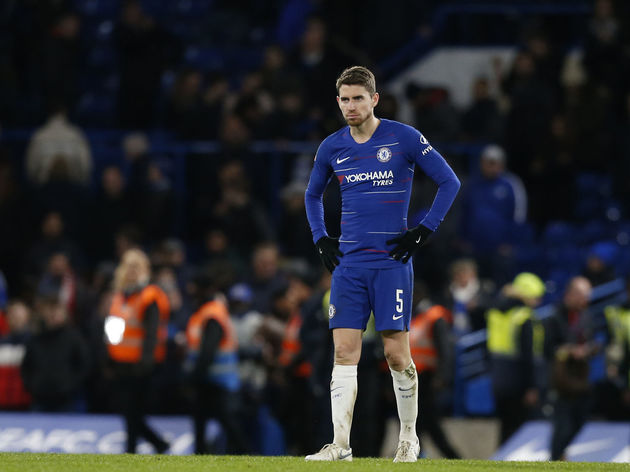 Possibly the most surprising name on this list, Jorginho is seemingly not everyone's cup of tea. The Italian reunited with his former Napoli boss Maurizio Sarri at Stamford Bridge, and has been used as the pivot in his manager's much-vaunted 'Sarri-ball' philosophy.

Despite predominantly being considered as the side's chief playmaker from defensive midfield, the 27-year-old is always on the move looking to receive the ball, and so it's no surprise to see him feature not only on this list, but one for most passes too. With Clarets manager Sean Dyche founding his entire managerial philosophy on ensuring his side puts in the maximum effort week in and week out, it's unsurprising to see a Burnley midfield make the cut.

An England international, Cork has become a Premier League veteran in his spells with Southampton, Swansea and now Burnley. Having featured in all 38 league games last season, the 29-year-old has enjoyed another successful campaign from central midfield, but falls just shy of reaching the milestone of 300km in his 25 games. In quite the jump from Jack Cork in third, Palace's final entry on this list sees penalty king Milivojevic almost 7km clear of his nearest challenger (albeit having played a game more). The Eagles captain is an ever-reliable presence in holding midfield for Hodgson's side, and with his spot-kick prowess, is the side's top scorer with seven.

With Palace through to the quarter finals of the FA Cup, Milivojevic will have to be at his hard-working best to lead the side to their second domestic cup final in three years. Could it really have been anyone else?!

Since arriving on English shores, the amiable ​Kante has made it his mission to cover the entire midfield by himself. With an unprecedented level of energy, the France World Cup winner has very few critics both for his on the pitch performances, and off the pitch geniality.

Covering the most distance in his back-to-back ​Premier League title wins with Leicester and Chelsea were something, but still being top of the charts in a wildly inconsistent Blues team this campaign, and in an unfamiliar position, is something remarkable. ​