​Tottenham took a giant step towards the quarter-finals of the Champions League with an impressive 3-0 win in the first-leg of their round of 16 tie against Borussia Dortmund.

It was almost the perfect start for Tottenham on seven minutes, as Lucas Moura flashed his volley narrowly wide of Roman Burki's left-hand post. However,

Both goalkeepers were called into action again before the interval, as a smart save with the foot of Burki denied Son Heung-min from a tight angle on 36 minutes, while Lloris did well to palm away Dan Axel Zagadou's close range header on the stroke of half-time.

As they did in the first period, Spurs began the second-half on the front foot. This time, Maurico Pochettino's side managed to take the lead when on top, as Jan Vertonghen's pinpoint cross was confidently volleyed home by Son in the 47th minute for the opening goal of the tie.

He's the man of the moment!

His ninth goal against Dortmund, they must hate playing him! pic.twitter.com/L4jNKt6gYh

Spurs' tails were up following the goal, and they could've been further ahead on the hour mark had Christian Eriksen's ball for Son, who would've had a tap-in.

With seven minutes of the game remaining, Tottenham managed to double their advantage in the tie through the impressive Vertonghen, who converted the cross from Spurs' other wing-back, Serge Aurier, before a glancing header from substitute Fernando Llorente to convert a fine Christian Eriksen corner four minutes from the end put Spurs in control of the tie.

It was clear from the opening minute what Tottenham's plan would be, as Maurico Pochettino's side looked to hound their German counterparts out of possession at every available opportunity. And while Lucas Moura couldn't reward the hosts at the beginning of the first-half, Son Heung-min was able to two minutes after the restart. While Borussia Dortmund had the better of the opening 45 minutes, the second period was dominated by the Premier League side, whose pressing resulted in Jan Vertonghen gaining possession, before producing a stunning cross that Son Heung-min duly converted.

Their dominance was ultimately rewarded with two further goals inside the final ten minutes, as a Serge Aurier cross and Christian Eriksen corner were finished well by Vertonghen and substitute Fernando Llorente to cap a famous European night for the north London side against the current Bundesliga leaders.

It was between Son Heung-min and Jan Vertonghen as to who was Tottenham's best player, however the Belgian defender slightly edged his South Korean teammate due to his fine display while playing out of position as a left wing-back. Particularly in the second-half, Vertonghen epitomised Spurs' want to play on the front foot, with his glorious cross setting up Son for the games opening goal. He then netted the second with a fine finish of his own to cap a fabulous performance from the versatile defender.

2nd half different gravy Tottenham..... jan Vertonghan is one hell of a player people always go on about Toby but Jan is absolute superb

What a performance 3-0 vertonghan was world class tonight.

2013 - Jan Vertonghen has both scored and assisted in the same game for just the second time in his Tottenham career, last doing so in March 2013 against Swansea in the Premier League. Surge. #TOTBVB

Despite having the better of things in the first-half, Borussia Dortmund couldn't live with the onslaught Tottenham provided in the second period, as the German side were victims of a high-pressing approach. 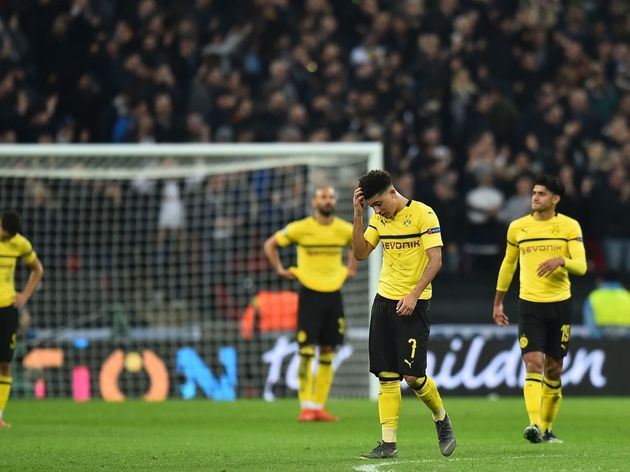 Lucien Favre's side were certainly hindered by notable absences, such as Marco Reus and Lukasz Piszczek among others, although in truth, Spurs were certainly deserving of the win.

Jadon Sancho was at the centre of all of Dortmund's positive play in the opening 45 minutes, as the 18-year-old's pace and dribbling ability caused numerous problems to much more experienced opponents. As Dortmund faded in the second period however, so did the Englishman's effect on the game, resulting in him being substituted two minutes before full-time.

Tottenham's next game is in a weekend's time following their elimination from the FA Cup, when they play Burnley away from home on February 23 in the Premier League.

Borussia Dortmund meanwhile are also away for their next game, which is against Nurnberg in the Bundesliga on Monday, while the second-leg of this tie is in three weeks time at the Signal Iduna Park.