Anatomy of a Save: Gordon Banks' World Famous Stop From Pele at the 1970 World Cup

​He played every single minute of the 1966 World Cup triumph, lead Stoke City to the only major trophy they've ever won and was named FIFA Goalkeeper of the Year on no less than six occasions.

And yet it is a contextually far lesser save from a 1970 World Cup group stage match that Gordon Banks is most widely remembered for.

Now, when I say insignificant, I don't mean to belittle the game. It was, after all, the deciding game of Group C, and pitted the last two champions, and greatest teams of the era, against each other. But it was not a cup final, even if it's ramifications have been felt wider than most in the intervening years.

We’re deeply saddened to hear that Gordon Banks, our #WorldCup-winning goalkeeper, has passed away.

Our thoughts are with Gordon’s friends, family and supporters at this difficult time. pic.twitter.com/nbzncYBCFA

It all started with a less than impressive speculative effort from Francis Lee that landed straight into the grateful grasp of Brazilian keeper Felix. At which point, the cameras hone in Lee, who, in beautiful piece of symbolism for not only the outcome of the match, but the entire tournament, looks far too tired for the first period of the game.

But while Francis has been hands-at-the-hips panting, Carlos Alberto has been prancing up the wing. With only the second greatest use of his boot that tournament, (the first, naturally, being ​THIS goal) the right back caresses the ball, with the outside of said boot, with untold accuracy, up the field.

With a twinkle of perfect spin, it lands graciously at the feet of the onrushing Jairzinho. It's worth dwelling, just for a moment, on just how good this pass is. If *spoiler* Pele had headed this in, then it would probably have rivalled Alberto's team-defining effort of a month later in legacy, and the defender may well be credited with the pass of the century, as well as the goal.

Alas, it is now a footnote, and one that is regularly excluded from the restored versions of the move, just like it is here.

We are deeply sorry to hear of the death of @England World Cup winner @thegordonbanks.

He was one of the game's greatest goalkeepers, a provider of stunning World Cup memories & a gentleman.

Our thoughts are with his family & friends. pic.twitter.com/tsD4c71Ixt

But then, that's because it's greatness is about to topped. Now, it's not overshadowed by the scampering Jairzinho, though his tenacity, guile and sheer velocity with the ball at his feet deserve some recognition.

The right winger ghosts past the recovering Terry Cooper - who is going at full pelt and is still two steps behind his opponent, mentally and physically. The only moving faster than Jairzinho at this moment is the ball, but after cruising past the left back, he somehow still has enough in his legs to beat that for pace too.

He scrambles to the byline, and wraps his foot around the bobbling with adidas Telstar with exquisite accuracy. While it's lofted nature precludes an unmarked Tostao at the near post from getting the ball, it's not aimed at him. It's aimed at the greatest player in the world: Pele.

 I am one of the many who built their dreams on your perfect save!Once more, with all my heart: thank you, dear #GordonBanks

The 29-year-old, now at the peak of his powers after progressing from his wonderkid status at the previous three tournaments, was ready and waiting.

His salmon-like (as Banks would later describe it) leap is a foot or two greater than Tommy Wright's effort, and is timed with immaculate precision. His forehead attacks the ball with such force, that he is forced to take three to four steps back when his foot return to the ground.

It is in these recovering steps that he breaks out into his famous two-armed celebration - because why wouldn't you? As Pele described in his ​emotional tribute to the custodian: "When you are a footballer, you know straight away how well you have hit the ball. I hit that header exactly as I had hoped. Exactly where I wanted it to go."

And so he did let his arms momentarily reach to the sky with delight. But, unlike some of his teammates, the 32-year-old from Abbeydale, Sheffield between the sticks was not catching a breather. He was peddling across his line, anticipating the line of Pele's header.

of course there was THAT save, but its so much more we are mourning today. RIP Gordon Banks. @England legend, your legacy will live on. All my thoughts with the family pic.twitter.com/iyAKdH2Mfm

Even then, though, it shouldn't have been possible. It was too well hit. There was too much pace on the ball. But Banks had never bowed to the conventions of football, let alone physics, to allow that to get on his way.

Matching the Brazilian's athleticism with some salmon-leaping of his own, he dives to his right. But it's not just to his right, it's behind him to his right. He dives with desperation and instinct, with his face staring into the netting behind him and somehow, somehow gets his palm on the ball.

But it's surely futile. Surely in vain. It's a valiant effort, but there's no stopping that. And yet this claw powers the ball into the air. And it rises, and it rises until the ball is above the bar. And then the ball drops, and it is on the other side of the touchline, dribbling past the open-mouthed photographers towards the dumbfounded crowd. And it's a corner.

A fierce opponent and a good man.

Banks would later thank the bounce. The bounce. Thankfully, and understandably - it's hard to adjudge your own genius - the victim of this save has been able to articulate the event far greater than the producer.

In that tribute to his adversary on that day, Pele proclaimed: "He came from nowhere and he did something I didn't feel was possible. He pushed my header, somehow, up and over. And I couldn't believe what I saw. Even now when I watch it l, I can't believe it. I can't believe how he moved so far, so fast."

But the reason this moment had far more ramifications than most cup finals isn't just because of its greatness - Brazil won the game anyway. It's because, perhaps more than any other event in football history, it sparked a connection between two players that failed to dissipate in the 48 years after. 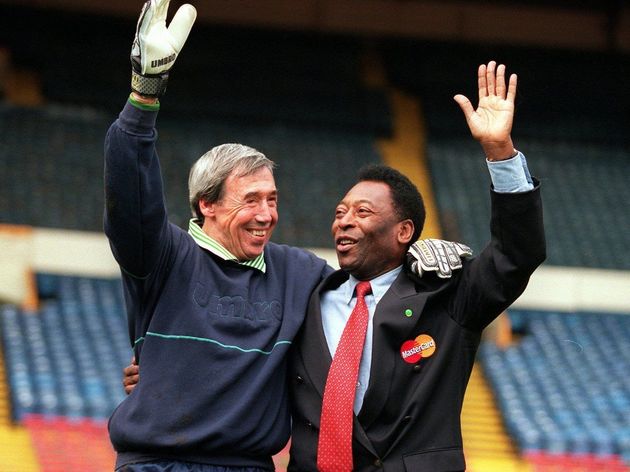 The Brazilian explained: "While it was indeed phenomenal, my memory of Gordon is not defined by that - it is defined by his friendship... So I am glad he saved my header - because that act was the start of a friendship between us that I will always treasure. Whenever we met, it was always like we had never been apart."

That's what the greatest save in the history of the game can do.