Newcastle head coach Rafael Benitez has revealed 'it's too early' to talk about a possible permanent deal for loan star Salomon Rondon.

The Magpies captured the services of Rondon on a season-long from West Brom in the summer, and the Venezuelan has proven his worth after netting six Premier League goals already this season. But despite his impressive form, Benitez is remaining coy on the striker's future.

The Spaniard simply challenged Rondon to 'focus on scoring goals' between now and the end of the season, explaining (via the ​Chronicle) that it is 'too early' to think about bringing Rondon to the club on a permanent basis:

“He just needs to focus on trying to do well and score goals. In general, he is doing well. He could score more goals but he could play worse. He is playing well, he is scoring goals, he is giving others the opportunity to go forward, he is doing a lot of good things." 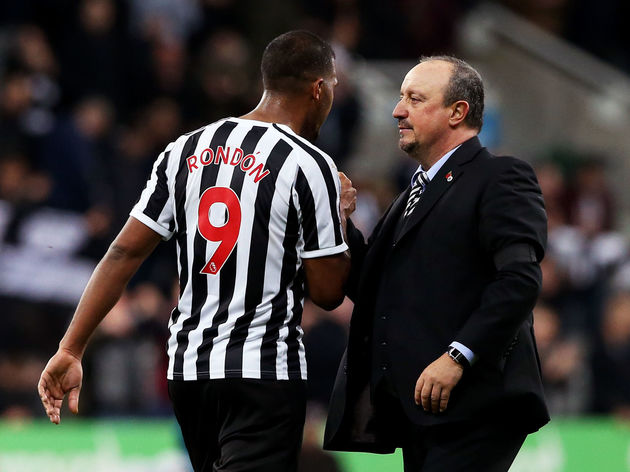 ​Newcastle owner Mike Ashley has installed a policy at the club of not spending vast amounts of money on players aged 30 or over, but with Rondon turning 30 later this year, Benitez revealed the forward has to keep scoring if he wants to secure a move to the Magpies:

"We will see. The main thing that he has to do is score goals and keep playing well. That is the best thing he can do if he wants to have a big name in the market.”

Salomon Rondon is showing why Rafael Benitez was so keen to bring him to Newcastle.

It would represent a large gamble if Newcastle were not to snap up Rondon, given that goals have been at a premium at St. James' Park this season. Rondon leads the scoring chart with an admirable six Premier League strikes, but his closest rivals are some way back on just three.