​Eintracht Frankfurt striker Luka Jovic could be on the move to La Liga next summer, as Barcelona and Real Madrid have both been linked with the Serbian sharpshooter.

Jovic is the top scorer in the Bundesliga this season with 14 goals this season, including a five-goal haul against Dusseldorf in October which put him on the radar of several European heavyweights.

Sources in Spain claim that ​Barça and ​Madrid are among them. Jovic could be a backup striker to Luis Suarez at the Nou Camp or a replacement for Karim Benzema at the Bernabeu. Bayern Munich and Chelsea have also sent scouts to watch Jovic play.

​FAZ believes that Barcelona have effectively won the race already, reporting that Jovic's representatives 'largely agree' on a contract with the Catalan side, with only a transfer fee to be finalised.

Luka Jović's agent has agreed a pre-contract with #Barca. Barcelona still have to negotiate a deal with Eintracht Frankfurt, who have not received an official offer from FC Barcelona yet. #RealMadrid, #Chelsea and #Bayern are also interested (Frankfurter Allgemeine Zeitung).

A specific value is not given, but the newspaper points out that a Bundesliga top scorer should not cost much less than the

Jovic is officially still a Benfica player, but his move to Frankfurt will be made permanent at the end of the season (or sooner) for just €7m. 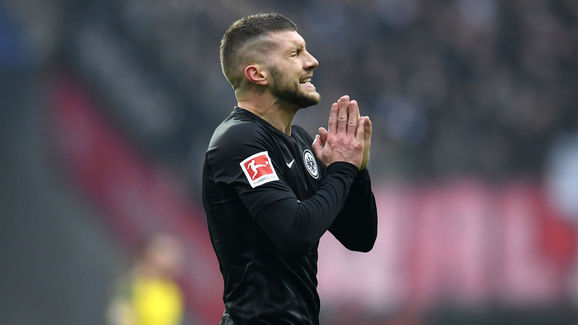 Frankfurt are enjoying an excellent season in the Bundesliga as they push for Champions League qualification, though they missed the chance to close the gap to the top four with a goalless draw against RB Leipzig on Saturday.

FAZ claims that Jovic's body language was that of a player who may be distracted by the rumours surrounding him, as he is no longer pressing or making space for himself.