Maurizio Sarri has claimed that his job as manager is 'always at risk', as Chelsea were thrashed 6-0 by Manchester City at the Etihad Stadium on Sunday afternoon.

Goals from Sergio Aguero, Raheem Sterling and Ilkay Gundogan meant the Blues suffered their worst defeat in Premier League history, while they also dropped down to sixth place for the first time this season.

Sarri was asked about fears over his job in his post-match press conference. As quoted on the club’s official website, he said: “I don’t know, you have to ask the club. I am worried about my team and the performance but my job is always at risk, and so I am not worried about the club.

Chelsea owner Roman Abramovich has a brutal reputation with managers, having gone through 13 coaches in his 16-year-tenure.

The 6-0 drubbing was Chelsea’s heaviest ever Premier League defeat, and their biggest defeat in all competitions in 28 years. It is also their third away defeat in a row, having scored zero goals and conceded 12 goals in those games.

0-6 - Chelsea suffered their heaviest defeat in any competition since losing 0-7 to Nottingham Forest in April 1991. Drubbing.

Asked whether the defeat made him doubt his style of football, Sarri answered: “No, because today I did not see my football. We need to understand the reason why at the moment it is not working.

“It is not easy. In the beginning we played better away than at home, now we play better at home than away, something has changed. At the moment I am not able to see the reason but I have to work for this. 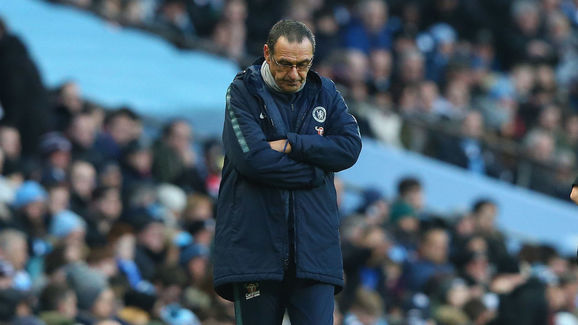 The game couldn’t have started any worse for Chelsea, as they went behind after three-and-a-half minutes from ​Sterling’s strike. They eventually found themselves 4-0 down after just 25 minutes, before ​Aguero and Sterling added second-half goals.

Speaking about the game, Sarri said: “We started well and then we conceded the goal after four minutes in a stupid way. At that moment we only had to stay in the match but we were not able with the mind to do that as we made a lot of mistakes against the wrong opponents.”