​Manchester City manager Pep Guardiola has said that there is no pressure on his side, after they beat Chelsea 6-0 on Sunday afternoon to go back to the top of the Premier League table.

The Citizens ran out winners thanks to a hat-trick from Sergio Aguero, a brace from Raheem Sterling and a strike from Ilkay Gundogan, as they overtook Liverpool, who have a game in hand, at the league's summit.

Speaking to Sky Sports after the victory, Guardiola was delighted with the performance, while he remained adamant that his side face no pressure in the title run in.

He said: "Pressure does not exist. What pressure can the players feel? You have to play like a team, if you win: perfect. If you don't win you try next season."

He added: "We are privileged to be players or managers, involved in one team. They have to try to do their best. That is why I demand from them. But pressure is society stuff, there are many, many troubles around the world to think you have pressure."

The ​Manchester City manager also spoke in his post-match press conference and, as quoted on the club’s official website, he said: “The desire to want to do the best is incredible. These guys work a lot. The only way I know is the more you win more you have to work.” 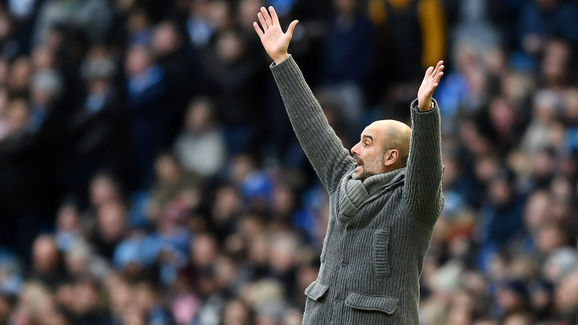 Manchester City were top class at the Etihad, and regained their top spot thanks to their superior goal difference. City needed to win against Chelsea, after fellow title challengers Liverpool beat Bournemouth 3-0 on Saturday afternoon.

Speaking about their title rivals, Guardiola said: “(Winning) is the only way we can maintain the level and compete against Tottenham and Liverpool. Liverpool have a bigger trophy room than us, so to be there (at the top of the table) means a lot!”

Although the Citizens were 4-0 up within 25 minutes, they did so without key player ​David Silva. Guardiola dropped the Spaniard for Sunday’s game, after having missed just four league games all season. When asked about leaving Silva out of his starting lineup, Guardiola said: “I need him. I miss him when he’s not playing, but sometimes I also don’t play Kevin [De Bruyne] or Sergio [Aguero]. To drop [Ilkay] Gundogan is so difficult.

“He is the best player in the world to play in those small spaces. He played last two games against Arsenal and Everton and was key, he was incredible. We have a lot of games left and a lot of players.”