Borussia Dortmund suffered a shock third round DFB-Pokal Cup exit at the hands of Werder Bremen, as they were beaten on penalties at Signal Iduna Park.

It was the visitors who drew first blood on five minutes, when Kruse's low free-kick was poked home by Milot Rashica beyond the helpless Eric Oelschlagel.

Dortmund, four time winners of the German Cup, sought an immediate reaction through Mario Gotze, but his clever flick fell inches wide of the upright, before Raphael Guerreiro failed to get on the end of ​Marco Reus' tantalising low cross.

Despite having 68% possession in the first period, the hosts found a dogged Bremen defence, who threatened to double their lead through goal-scorer Rashica. However, the Black and Yellows levelled on the stroke of half time as Reus curled a delicious free-kick past Pavlenka to go in all square. 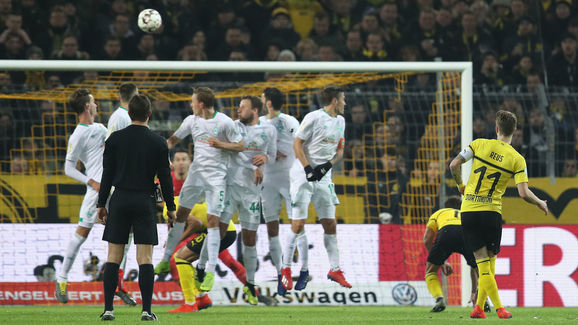 ​Dortmund beat their opponents 2-1 in the league meeting back in ​December, but had their keeper to thank as he tipped over another Kruse free-kick, before Thomas Delaney came agonisingly close moments later from a header, as neither side could prevent extra time.

Four goals in an extraordinary final period would see Dortmund lead twice through Christian Pulisic and Achraf Hakimi, only for Claudio Pizarro and Martin Harnik to peg back the hosts, leaving penalties to decide this topsy-turvy affair.

After Alcacer and Philipp spurned their spot-kicks, Kruse stepped up to fire Bremen into the fourth round at the expense of their shell-shocked counterparts.

Despite Dortmund sitting seven points clear of ​Bayern Munich in the race for the Bundesliga title, Lucien Favre named a strong lineup as they attempted to bounce back from their league stalemate at Eintracht Frankfurt. 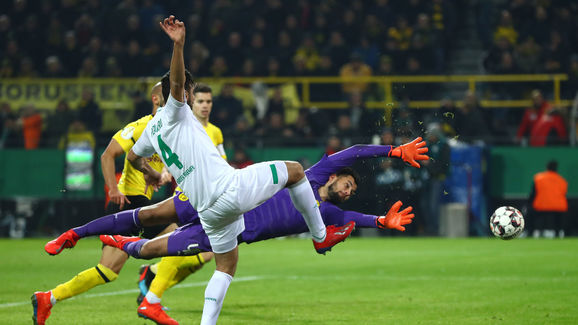 The decision to start a number of key players including Reus, Gotze and Pulisic looked to have paid off, but his side were ultimately beaten.

Despite being subbed off at the interval in what appeared to be a tactical change, Reus' moment of magic ultimately dragged his side back into the tie.

Standing over the ball, the outcome was almost inevitable, such is the German's blistering form this campaign as he continues to resurrect his injury-stricken career. The goal was his 16th in all competitions and third in the DFB Cup. That said, Pulisic ran him close with a splendid second goal.

Whilst his fellow compatriot Hakimi flourished on the right hand side, left-back Abdou Diallo struggled to have the same impact.

I love Diallo as a player, been terrific in central defense, and he's solid as a defensive-minded left back. But with Diallo and the slow-footed Guerreiro on the same side, Dortmund has zero penetration on the left wing. (Hakimi looks worse at RB as well.) #bvbsvw

The Frenchman failed to adapt to a more attacking role than his accustomed centre half position, with his wayward effort in extra time compounding a poor display alongside his defensive teammates.

Following their exit, Dortmund are straight back in action when they host Hoffenheim on Saturday, before travelling to Tottenham in the Champions League round of 16 first leg.

Meanwhile, the victorious Die Werderaner welcome Augsburg on Sunday as they look to keep their slim European qualification hopes alive. ​