​Liverpool missed out on the chance to go seven points clear at the top of the Premier League following their 1-1 draw with Leicester City.

With the pressure on the Reds to take advantage of Manchester City's slip-up against Newcastle, the Reds made a perfect start to proceedings, taking the lead after three minutes through a composed finish by Sadio Mane - his tenth league goal of the season.

Dream start for the #PL leaders

A fine Kasper Schmeicel save prevented Roberto Firmino doubling the hosts lead three minutes later as the hosts looked to make their early pressure count, although they were given a scare when James Maddison somehow headed wide from just five yards out after 25 minutes.

Leicester had given a good account of themselves in the first period, and managed to stun the majority of Anfield on the stroke of half-time, as Harry Maguire converted Ben Chilwell's looping header, after the initial free-kick was only partially cleared, to level matters at the interval.

Leicester equalise before the break!

Harry Maguire with the goal 力

The Foxes centre-back almost had a hand in putting them ahead seven minutes after the restart, with his header directed goalward by Firmino, although his compatriot Alisson was there to block on the line, while Liverpool felt aggrieved that Ricardo Pereira's challenge inside the area on Naby Keita only resulted in the award of a goal kick at the other end.

Firmino forced Schmeichel into another save as the game entered the final 15 minutes, and Mane headed over in added time, but the visitors held on for a share of the spoils.

Following Manchester City's shock defeat to Newcastle the evening prior, Liverpool had a terrific opportunity to open up a seven point lead over their nearest title rivals, although it would only be a five-point lead come full-time. After an explosive start, taking the lead after three minutes, Jurgen Klopp's side appeared hindered by nerves for the remainder of the contest, with the game's equaliser coming from a needless foul from Andy Robertson, before the Reds failed to clear the subsequent free-kick.

While Liverpool still managed to extend their lead at the top of the Premier League, they will see it as a chance missed to give themselves a generous cushion.

The only attacker in a red that looked threatening, Sadio Mane gave Leicester a genuine problem with his pace and direct running, while the forward took his goal well, creating the space with his first touch before finishing well with his second.

Sadio Mane is such a good footballer. Absolute joy to watch tonight. #LFC

A number of Liverpool players had an off night with the league's top goalscorer, Mohamed Salah no exception. The Egyptian forward failed to have any impact, as a physically imposing Leicester defence marked him out the game. 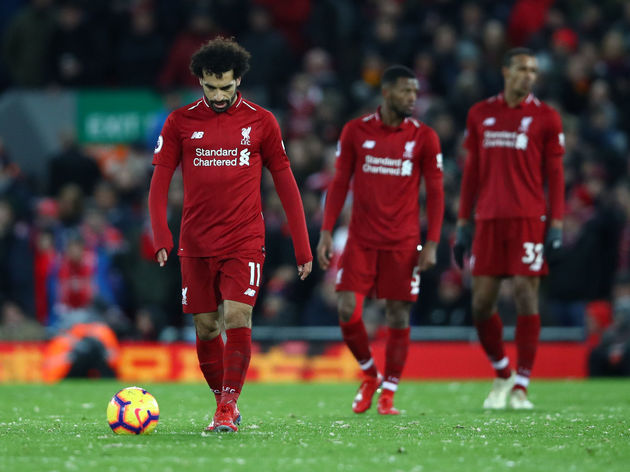 Following wins against Chelsea and Manchester City in their previous two games against top six sides, Leicester proved they're able to provide a stern test for the league's best once again.

Barring the opening six minutes of which the hosts started brightly, Claude Puel's side looked organised in their defensive duties, while causing a threat, either on the counter or through set-pieces, which is where their equaliser stemmed from. While Leicester continue to be consistently inconsistent from week to week, their performance at Anfield highlighted the quality they have at their disposal, and the subsequent threat they can provide.

The entire of Leicester's defence were outstanding on the night, although Harry Maguire slightly edged his colleagues, with the England international causing problems in Liverpool's box, as the goal alludes to, as well as nullifying the attacking threat the hosts are capable of.

James Maddison continually made the wrong decision throughout the game, with the midfielder spurning a great chance with a header he looked to head across goal rather than on target, while doing so again with the ball at his feet at the beginning of the second period.

Next for Liverpool is a trip to West Ham United this Monday, with their lead potentially down to just two points by the time they kick off.

Leicester meanwhile host Manchester United on the Sunday, hoping to secure another positive result against one of the league's top six.