Southampton and Crystal Palace played out an entertaining 1-1 draw at St Mary's, in a game that saw Wilfried Zaha sent off in second half stoppage time.

The visitors started the better of the two sides, and took the lead through Zaha, who scored his first goal in 17 games, with eight minutes to go until half-time. 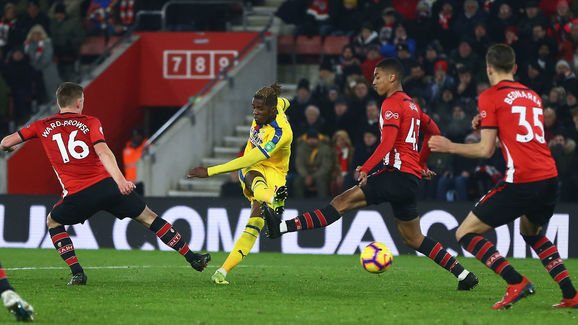 The Ivorian turned home Andros Townsend's pass after good work down the right hand side from Senegalese midfielder Cheikhou Kouyate. The goal was the least Palace deserved, with their constant threat in behind the full-backs causing the home side a number of problems.

Palace thought they had doubled their lead early in the second half, but Mamadou Sakho's strike was penalised for a foul. The visitors misfortune would be punished with just under 15 minutes to go, as Saints midfielder James Ward-Prowse tapped home from six yards out to bring the sides level after good link up play from Matt Targett and Stuart Armstrong. The game opened up following Southampton's equaliser with Armstrong continuing to make an impact off the bench. It would be ​Zaha who stole the headlines though, after he was sent off in stoppage time for sarcastically applauding referee Andre Marriner - his second caution in less than a minute.

Southampton were lucky not to have been down to ten men mid way through the first half. A rash challenge from Jack Stephens went unpunished after the defender had a heavy touch and flew into a challenge with Townsend dangerously. Replays seemed to show the defender off his feet, with his studs showing into Townsend's standing leg.

Referee Andre Mariner did witness the tackle, but didn't give a foul at all. With a differing outcome, the dynamic surely would have changed, but r

Southampton fan favourite Ward-Prowse​ consistently found himself in good positions out wide. The midfielder started the game in a central position but tended to drift wide and provide good width and crossing options for the Saints.

He was quick in support of Southampton's forwards and arrived in good positions on the edge of the box.

​Southampton's Jack Stephens had a mixed performance at the back. The centre back was lucky to escape without a red card for an early challenge in the first half, and continued to make some sloppy mistakes throughout. Stephens misplaced a few passes and was struggling to deal with the runs of Zaha and Townsend in behind his full backs.

For all of Willfried Zaha's good work in the first half, he lost the plot late in the ​second half and was sent off controversially by referee Andre Marriner.

The Ivorian received a yellow card for causing a confrontation between himself and Ward-Prowse, before receiving a second yellow just moments later for sarcastically applauding and mocking the referee's decision. will now miss the game against Fulham through suspension after ending his 17 game goal drought.

Aaron Wan-Bissaka had a solid game once again at right back. The youngster continues to prove he is the real deal, and with Gareth Southgate watching on in the stands, one might think he could be in line for a call up to the England senior side.

He made several important interceptions in defence and didn't let anything past him all evening. His decision making could have come into question at times when he lunged into tackles that perhaps he didn't need too. However, his athletic ability got him out of trouble as he looked comfortable dealing with Nathan Redmond and Danny Ings.

Mamadou Sakho had a night of high's and lows. The defender had a shaky start making several misplaced back passes, which continued throughout the evening.

He struggled to find his passing range and struggled with the ball at his feet. His defensive partner James Tomkins and goalkeeper Crystal Palace look forward to a home tie against struggling Fulham, whilst Southampton travel to Turf Moor where they will face fellow relegation strugglers Burnley.