Manchester United forward ​Anthony Martial has agreed a contract extension which will keep him at Old Trafford until 2024.

Martial's current contract was set to expire at the end of next season after the club triggered an optional year's extension to his contract recently, but senior figures at the club have been working hard to secure his long-term future after a strong season so far.

Journalist ​Mohamed Bouhafsi claims that Martial will sign his new deal on Friday, before ​Manchester United's next Premier League match against Leicester.

Anthony #Martial has agreed new five-year contract (june 2024). The signing of the extension will take place before Friday ! #MUFC

​Martial came in for some heavy criticism from former manager Jose Mourinho and was rumoured to leave the club last summer after being fined for his extended absence from a training camp.

However, he responded on the pitch with six goals in five Premier League games, and Mourinho said in November that he would like Martial to stay.

Even though Mourinho was sacked the following month and replaced by Ole Gunnar Solskjaer, talks have continued to tie the Frenchman down for whoever is in charge at Old Trafford next season. 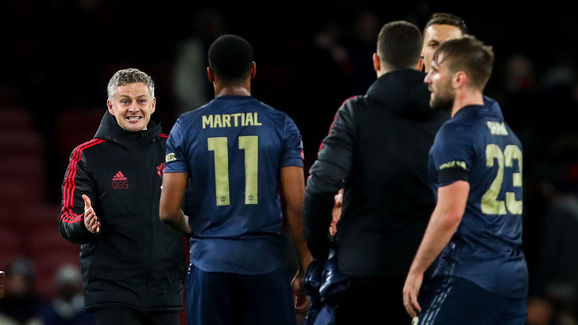 Martial was absent from Solskjaer's squad as his winning run ended with a draw against Burnley on Tuesday, with Solskjaer explaining that the 23-year-old had a knock.

"He got a slight injury in training but hopefully he’ll be back for next weekend," Solskjaer said.

Contract negotiations continue apace for United, who have a number of players out of contract at the end of the season, including ​Juan Mata and ​Ander Herrera.