Milan secured their place in the Coppa Italia semi-finals, as they beat Napoli 2-0

at San Siro on Tuesday night.

After a dull 0-0 draw between the two sides last Saturday, Milan took just ten minutes to take the lead. It was new signing Krzysztof Piatek who gave the Rossoneri the breakthrough, as he finished cooly to mark his full debut with a goal.

Piatek doubled the home side's advantage in the 27th minute, as he cut back and scored with a wonderful finish to put Milan in cruise control. Napoli had dozens of chances throughout the game but were unable to capitalise as the hosts took the win on a big night.

The result sees Milan qualify to the last four of the Coppa Italia as they get the quarter-final stage underway. They now progress to the two legged semi-final, with the first leg being played on 27 February. 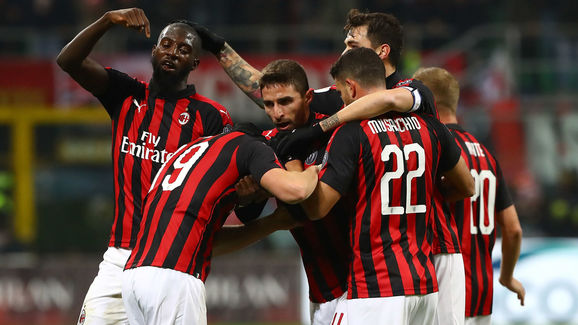 ​Milan deserved to go through, as they produced an excellent performance at San Siro. Although the visitors were far from poor and definitely made the hosts work, it was a convincing and hard fought victory for the Rossoneri who progress to the final four of the cup.

They seemed to have the job done after Piatek's goals in the first half hour, though they had to dig deep to secure passage to the next round. With no European football and 24 points off the top of Serie A, the Coppa Italia may be Milan's best chance of silverware this year. STAR MAN - Making his second appearance and his first start for the club, Krzysztof Piatek was outstanding up front. Having joined from Genoa last Wednesday, life in Milan has got off to a fantastic start for Piatek as he scored twice within the opening half hour.

His goals gave the Rossoneri control of the tie, as he was absolutely fantastic up front in a night to remember. Special mentions should also go to Tiemoue Bakayoko and Diego Laxalt, who put in solid performances for Milan.

WORST PLAYER - It was not a woeful performance for Samu Castillejo, but he was rather quiet in a rampant Rossoneri display. He did little wrong on the night, though could have contributed far more at San Siro. ​Napoli played some very good football, yet found themselves 2-0 down in less than half an hour.

It was far from a poor performance for Carlo Ancelotti's side, with chance after chance produced by the Partenopei. However despite a decent performance it all counts to nothing for Napoli.

Truthfully, it is concerning that one of the richest attacking sides in Italy failed to score in 180 minutes of football against Milan following on from their 0-0 league draw last week. Although they fought until the end, it wasn't enough as the Partenopei crashed out of the Coppa Italia. 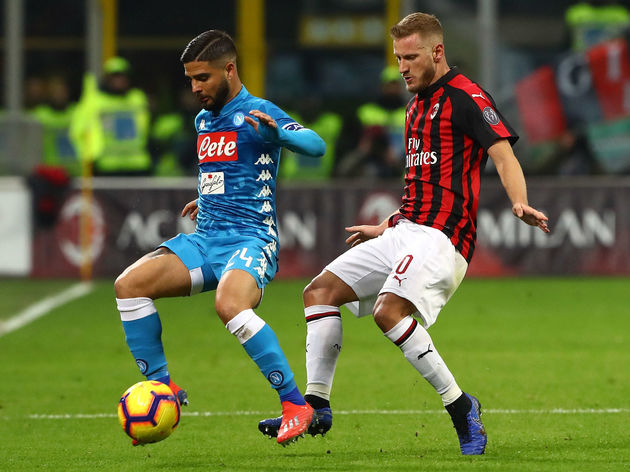 STAR MAN - Although Napoli failed to score, captain Lorenzo Insigne did his best to lead by example. Despite a frustrating attacking performance for the visitors Insigne played well up front, though a crucial goal from Napoli's third top goalscorer this season was much needed.

WORST PLAYER - Following on from his man of the match performance in Napoli's 2-0 win over Sassuolo in the last round, it wasn't Arkadiusz Milik's day. He wasted chance after chance and couldn't convert for Napoli in a difficult night for the Partenopei. Back in ​Serie A action, Milan have a huge trip to the capital on Sunday, when they face Roma at the Stadio Olimpico. They return to San Siro the following Sunday, hosting Cagliari on 10 February.

Napoli are back at the Stadio San Paolo on Saturday, hosting Sampdoria in Naples. They then travel up North to Florence, as they play Fiorentina on 9 February.